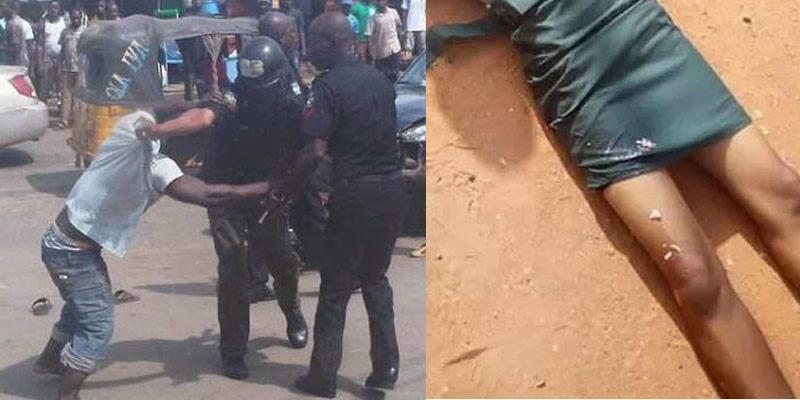 I want justice, says mother of girl killed by accidental discharge while policeman struggle with suspect

Mrs. Janet Anifowose, mother of a 17-year-old girl killed by trigger- happy policeman at Akoun, Ikorodu, Lagos State, has demanded justice over death of her daughter.

Anifowose, in an interview with the News Agency of Nigeria (NAN) on Saturday, said Adijat Shakiru was the only apple of her eyes.

According to her, the girl was killed shortly after returning from school on Wednesday (read earlier report here).

Some police operatives attached to Lagos State Taskforce on Environment came to the area for an operation and in the process one of them shot Adijat, an SSCE 1 student.

“When my daughter returned from school, she started doing her homework, few minutes later we saw people started running all over the place and all of a sudden, I heard gunshot.

“Immediately, I saw my daughter lying on the floor in a pool of blood.

“When I realised she is dead I tried to hold the policeman but he jerked my hand and push me away.

“I called on my neighbours to help me and they came out and supported me, carried my daughter inside a pool of blood where she was lying dead.

“One of them suggested that we should go and report the case to the police since it involved their officer; three of my neighbours and other people accompanied us to the police station at Imota.

“On getting there, due to the crowd, the DPO ordered that we should be locked up and the crowd should be dispersed; the car that brought us, the tyres were deflated, three people, including me, were detained.

“At about 11 p.m., the Area N Commander came and ordered that I should be released as well as drove me back to my house at Akoun in Adamo with his car. I am calling on Nigerians to help me, this is an injustice from the police.

“My daughter is the only one that assists me every time, now they have taken her away from me, people should come and help me this is cheating,” Anifowoshe said.

Elkana said that one Sgt. Mudi Emmanuel was undergoing orderly room trial at the Command’s Provost Marshall Unit for professional misconduct over the killing.

Elkana added that Mudi’s actions fell short of the rules of engagement for the use of firearms and professional standards for police and would be charged to court for murder.