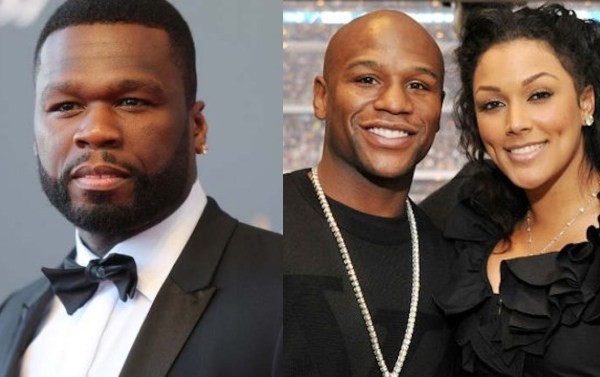 Rapper 50 Cent has mocked professional boxer Floyd Mayweather who has been accused of taking his ex-girlfriend’s jewelry.  Floyd Mayweather allegedly took the $3million worth of jewelry back from his exbShantel Jackson after their split.

According to Shantel Jackson, Mayweather took back a diamond ring worth $2.5 million, a set of ten carat diamond earrings worth a quarter million dollars, a $100,000 diamond bracelet, a $32,000 Chanel watch, a $21,000 Louis Vuitton lock necklace and a $20,000 diamond heart necklace.

This latest accusation is coming five years after she sued him for assault and battery. Reacting to the news, Mayweather’s former friend 50 Cent, who is known to troll the boxer, took to social media to make mockery of the situation.

“Champ took the shit back, huhnah I ain’t gonna lie I’d do the same shit. LOL Champ you not gonna win, she got Gloria Allred give her a mill or two and let her go before shit gets crazy”, he wrote.

‘BE MINE TILL ETERNITY’ – Femi Adebayo Celebrates ‘Ex-Girlfriend’…

Floyd Mayweather’s ex accuses him of $3m worth jewelry theft