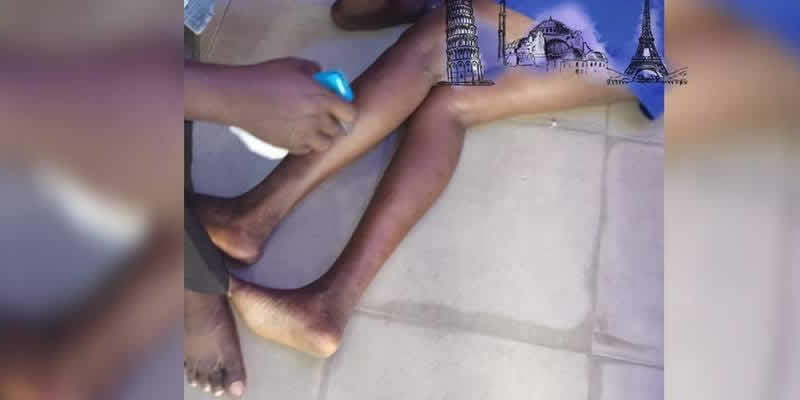 Lady slept over at Honourable’s Birthday Party, then this happened

A man based in Akwa Ibom state has revealed how he saw a lady being beaten up by her lover in a shop because she attended the birthday party of a Honourable and slept over.

According to the beater, he decided to teach the lady a lesson after purportedly picking her up from the streets five years ago and taking care of her since then.

The lady who was warned and urged to leave the man due to the constant beatings, still went back to him after he begged her and promised not to beat her again, a pledge which he failed to keep.

Read below what Ab Isong shared on Facebook yesterday.

Two weeks ago I was at a shop with a friend to purchase something. While bargaining, the shop owner suddenly said to me “Please sir help! Ke eya wod ayin ako.” (they’ll kill that pikin) I asked where? And she pointed to the shop opposite hers. The glass door has been closed but you could see people struggling at a critical look.

I crossed over. Forced the door open and behold a helpless girl being given heavy wrestlemania punches by a hefty man. Her girlfriend was holding him and murmuring don’t beat her again. When he sighted us, he gradually stopped hitting her but vexatiously saying I’ll kill you. You can’t work here again.

I calmed him down and he began narrating how he picked the girl from the road, visited her people and spent about 100k blablabla. How the girl had lived with him for 5 years but recently started misbehaving. The core reason for this particular beating was that, the girl followed her madam to a birthday party of a certain Honorable against his wish and to worsen it, She slept over!

While He was talking I noticed the girl on the floor was almost passing out. Her neck was mikking nte unen emaeke kpikke itong. I asked for chill water to be poured on her. Thank God that helped.

She accepted being at fault. She is an orphan as well and yes she took him to see her relatives five years ago. But added she is tired of being with the guy. She wants to quit. That she has been receiving similar beatings for five years. Hmmmm sister Endurance!

I rebuked the guy for laying hands on her. I was so bitter. Seeing the girl was determined to move on and the guy vowing to kill her if she quits, I took her to the police to report the threat so the guy can be invited to sign an undertaking. (this was after the guy left). She went, parked her things to her girlfriend’s place and was so serious.

To my greatest surprise when I saw her two days ago, she said sir I went back to him. He came pleading and has promised never to beat me again. I smiled and told her congratulations! I’m putting up this post because an hour ago she called asking for help that the guy has beaten her again.

Someone else may be going through this. Listen!!! Stop cohabitation! It takes away your integrity as a woman.

Teenager shot dead for knocking on a wrong apartment door

Video: Lady from ‘hell’ maltreat young boy, traps him inside dog cage in…