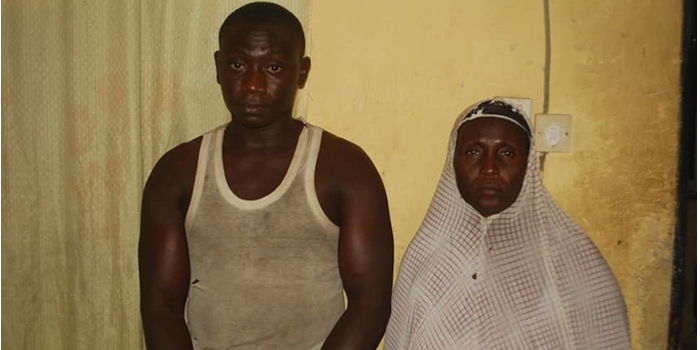 The Niger state Police Command have arrested a 25 year old son, Babangida Usman and his mother, Hafasat Aliyu for beating the father, Ali Haruna to death.

The Nation learnt that the couple, Hafasat Aliyu and Ali Haruna were having a fight and in trying to protect his mother, the mother and son joined hands in beating the deceased who was about 60 years.

The incident occurred behind Shango Primary School Minna in Chanchaga local government area following a disagreement between the couple over the daughter who was said to have stolen Hafasat’s money.

The deceased was said to have defended the daughter from the mother which led to a physical fight.

Upon hearing that his parents were fighting, the son, Usman rushed to the house and while defending his mother joined her in beating his father which led to serious injuries before he was rescued by neighbors.

However, in the bid to take him to the IBB Specialist Hospital for treatment, he died on the way to the hospital.

Speaking to newsmen, Usman said he was only protecting his mother and did not know it will lead to the death of his father.

According to him, his father was always maltreating his mother over things that should not cause quarrel saying, “that was why I always protect my mother from maltreatment of my father.

“My mother is not safe with my father because of his temperament, everyday there must be an issue that would escalate to fight. I never knew he would die, I was only protecting my mother,” he explained.

The Police Public Relations Officer, Mohammad Abubakar, confirmed the incident saying that the suspects had confessed to the crime and would be charged to court soon.