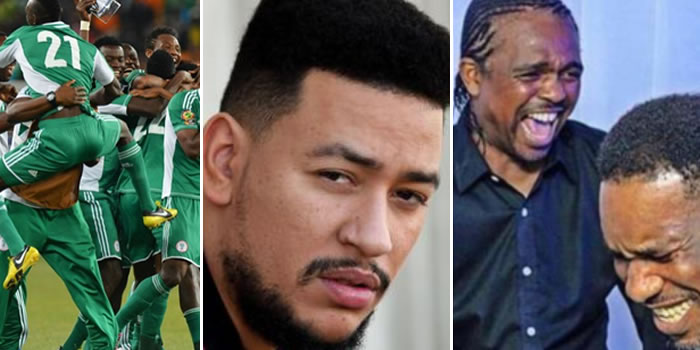 It was a day of victory for Nigeria’s super eagles against the Bafana Bafana of South Africa after winning the quarter-finals by 2 goals to 1 and one celebrity, AKA, a popular rapper got the banter he never expected from Nigerians on social media.

Before the game began, social media was agog with loads of reactions in anticipation of the game and as expected, South Africans took the lead role in slandering their rival country, Nigeria, they even started a hashtag; #IfBafanaBeatsNigeriaIWill.   Interestingly things took a different turn after the Super Eagles soared all through the game with the Bafana Bafana team, bowing in shame after an impressive play from both teams.

Reacting to the loss, AKA who lost the BET Best International act awards to Nigeria’s Burna Boy, took to his Twitter handle to express his disappointment in the trun out of the game and did nothing to hide his feelings towards Nigeria as a whole. See his tweet below:

Xenophobia: Zambia Cancels Bafana Bafana Friendly Due To Attack On…

It’s a hard pill to swallow man. We keep on losing to Nigeria in every way. 💔

Nigerians didn’t show any remorse as they grabbed their keypads to deliver savage responses that will leave an impression that won’t go away anytime soon. See the reactions from Nigerians below;

What are your thoughts Nigeria’s victory against South Africa at the quarter finals? Kindly drop your opinion in the comment section below and don’t forget to share.