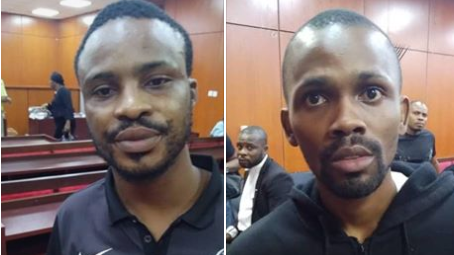 Obanore Edson and Paul Odion Oghiator are inmates jailed for one year. They were prosecuted and finally jailed on a one count charge respectively for offences bordering on obtaining by false pretence and impersonation. Specifically, Oghiator on Facebook impersonated the identity of James Minh, an American and subsequently sent documents to unsuspecting ladies with intent to defraud them.

According to a statement from the EFCC, the charge against Ogiator reads: “That you Paul Odion Oghiator (Alias James Minh) sometime between 2018 and June 2019 in Warri, Delta State within the jurisdiction of this honourable court did fraudulently impersonate in your FaceBook account the identity of one James Minh, an American and sends documents to unsuspecting ladies through the internet with documents you claim emanated from the said James Minh with the internet to obtain money from the ladies and you thereby committed an offence contrary to Section 22(2)(b)(ii) of the Cybercrimes (prohibition, prevention etc) Act 2015 and punishable under Section 22(2)(b)(iv) of the same Act”.

When the charge was read, the defendants pleaded guilty.

In view of their plea, prosecution counsel, Fredrick Dibang told the court to convict and sentence the defendants in accordance with the plea bargain agreement between the prosecution and defence counsel.

Justice Omotosho consequently sentenced the defendants to 12 months imprisonment each. The court also ruled that Ehimen forfeits the sum of N620,000 (Six hundred and Twenty thousand naira) in his GT Bank account to the Federal government of Nigeria while Oghiator was fined the sum of Two hundred thousand naira.