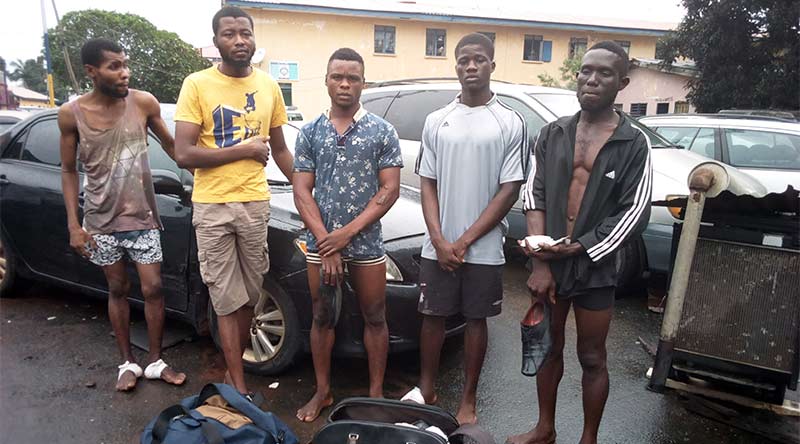 Suspected Killers of Catholic Priest arrested by Police in Imo

Egbom was shot dead on Monday on Nkwerre -Anara Road , while his vehicle was stolen.

The state Commissioner of Police , Dasuki Galadanchi , said the suspects – Chigozie Uzoukwu , 33 ; and Peter Ochokwu , 21 – were nabbed in Nkwerre on September 11 .

The CP , who decried the killing of the cleric , noted that the victim ’ s vehicle and travelling bag had been recovered .

The police boss explained that one of the suspects , Ochokwu , an ex- convict, had spent one year in the Owerri Prison for alleged involvement in an armed robbery case .

The CP said , “ On September 11 at Owerri Nkwoji, in the Nkwerre LGA , Imo State , F- SARS operatives , led by CSP Godfrey Victor , acting on a tip- off arrested two suspects in connection with the murder of Rev . Fr. Jude Egbom .

“ A black Toyota Corolla, with number plate , FKJ 984 EV , belonging to the hoodlums who robbed and murdered the cleric was recovered.

“ Some of the property in the suspect ’ s car were found with the one of the suspects in his house . ”

Galadanchi disclosed that one Raphael , the operator of the barber’ s where the priest had gone to shave before he was murdered, had also been arrested for questioning.

He noted that other members of the gang – Kelechi Nnajiuba ,24 ; Ifeanyi Chukwukere, 28 ; and Ekene Ohaeri , 27 – were in police custody for the kidnapping of a worker with the National Population Commission .

He said the suspects collected N 5 m ransom , shot the victim ’s police orderly and collected his AK – 47 rifle which they had been using to terrorise people in the state.

The CP added that the police were on the trail of two leaders of the gang.

According to Galadanchi , a pair of shoes , two vehicles, a travelling bag belonging to the slain priest and 46 pieces of Permanent Voter Cards were recovered as exhibits from the house of one of the two suspects .