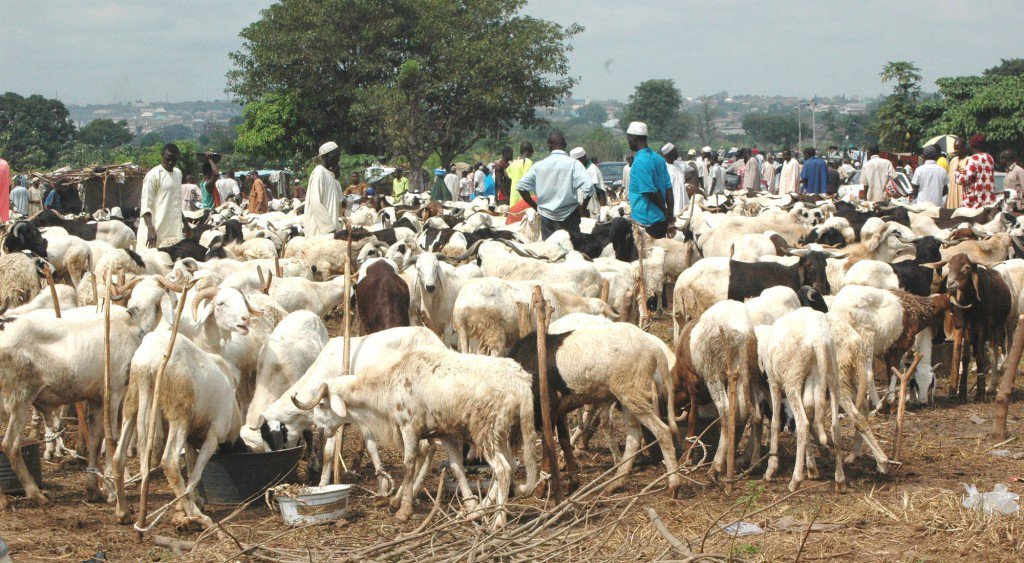 Ahead of tomorrow’s Sallah celebrations in Kaduna state, the prices of foodstuff, meat and ram have risen beyond the reach of many consumers.

However, sellers are decrying low patronage from customers because of hike in prices of essential foodstuff like rice, corn and livestock such as ram, cow, chicken among others.

Withinnigeria reports that many would-be buyers attributed their inability to hit the markets to the current economic hardship in the country.

Ram sellers interviewed at different markets in Central Market, Kakuri and Sabon Tasha Kaduna markets Saturday morning, said the present economic situation in the country was not encouraging consumers to patronise them like in the past.

Alhaji Shuaibu Abubakar, the chairman of Kaduna Central Market Livestock Association of Nigeria, told newsmen that the sale of ram this season has been very poor.

He said that the low patronage experienced by sellers was due to high unemployment among people and the loss of jobs due to retrenchment or downsizing by the state government.

According to him, even those retrenched from government establishment were not being paid their entitlements.

“There is general poor purchasing power among our customers due to recent sacking of our customers who worked with state government. They have not been paid their entitlement. Some couldn’t afford to pay their children school fees, how do you expect them to buy ram, chicken or rice?” he asked.

Abubakar said he brought over 500 rams from different states such as Kano, Maiduguri, Kebbi, Kastina yet as at yesterday (Friday), he has only been lucky to sell five.

Mallama Habitat Yamuna, a foodstuff seller majoring on rice, palm oil, beans and household ingredients at the Sabin Tasha Kaduna Market, also decried the poor turnout of buyers and attributed the development to lack of resources.

She described the situation as not encouraging, saying, “I am not happy coming this far from Kawo Kaduna and thinking the market will be better here but what I am seeing is heartbreaking.

“I spent a lot of money to bring these bags of rice and household ingredients and since I came, I have not sold up to 5 bags of rice unlike in 2018 that the situation was better,’’ she said.

Also speaking to newsmen in Kaduna Central Market, Mallam Yahya Danfulani, a livestock seller, attributed the poor patronage to the fact that most people were travelling out of the city to celebrate the Eid-el-Kabir with their loved ones.

Danfulani, however, appealed to Muslim faithful in Kaduna city to come out and patronise them.

A check at the ram markets in popular Zango, Bachama Road, Rigasa in Kaduna metropolis this morning, the situation was the same as the market recorded low patronage amidst availability of the essential animals needed in this festive period.

Alhaji Idris Saminaka, a livestock trader at Bachama road market, said that most of them had given up on their expectations of a boom in rams’ sales.

Saminaka said that he had sold only 15 of the 80 rams he brought to Kaduna four weeks ago.

“The economic situation has contributed to the low patronage and it is affecting even our pockets.

“The hope we have is very lean, as the festival is two days from now; we pray to make better sales to enable us sile home.

“Returning the animals to Saminaka will be a great loss to me because of the expenses I incurred transporting and feeding them in Kaduna,” he said.

Another ram dealer, Yakubu Danlasan, also blamed the current economic situation amidst other responsibilities for the low sales.

“The Naira doesn’t have much value now, present economic situation has become a factor to consider while spending money. People spend money on what they can afford, it is not easy for us selling the rams and also the buyers,” he said.

Danlasan however believes that the price would crash as many traders would not want to return home with their animals or livestock as they are awaiting any slight opportunity to dispose their wares.

Interestingly, Yusha’u Mutuka, a seasonal ram seller at Kaduna Zango Market, blamed the low patronage on the rise in the cost of breeding livestock.

He said: “The patronage is low because the animals are costly, we are not willing to sell below the expenses of transporting and fending for the animals. Business is done in order to make huge profit.”

Meanwhile, security around Kaduna state has been beefed up ahead of the Sallah celebration slated for Sunday (tomorrow).

Security personnel have been deployed to strategic and crisis-prone areas of the state to forestall any breakdown of law and order before, during and after the festivities.