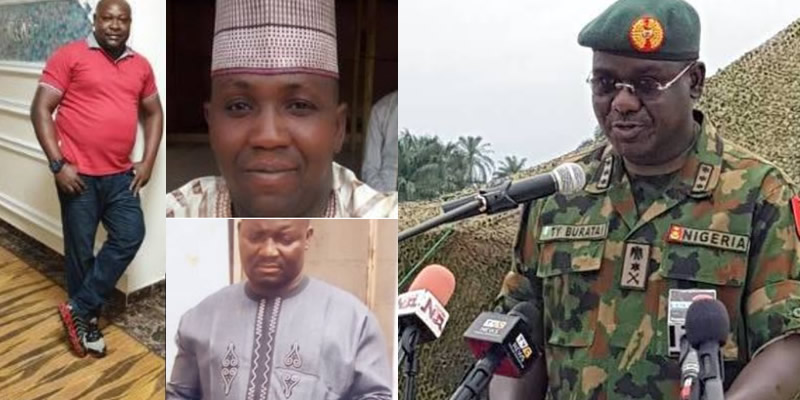 Few hours after Defence Headquarters panel arrested two policemen responsible for allegedly leaking confidential information to a suspected kidnap kingpin Hamisu Wadume, there is another report of leaked Memo that is fueling the ongoing feud between the Army and Police.

According to THE NATION, a leaked memo from the Chief of Army Staff Lt Gen Tukur Buratai directing soldiers to henceforth be circumspect in their dealings with the police over the Taraba incident might have deepened disaffection within the military and security forces.

Buratai, in a memo signed on his behalf by Brig. Gen. Felix Omoigui, directed all troops on IS (Internal Security) duty as well as personnel travelling in and out of uniform to be circumspect in their conduct to avoid escalation of the problem.

“Consequently, formations and unit commanders are to educate troops to be cautious in their dealings with members of the NP in view of this development. Troops travelling on pass are to endeavour to do so in mufti,” the memo dated 9th August which was reportedly dispatched to different army formations across the country stated.

But a source confirmed the said memo was leaked to the media by the Police to create tension within the security circles and continue to put the army on the defensive over the matter.

The source said unless the Presidency steps up efforts to douse tension and acrimony created by the Taraba incident, the two security institutions would henceforth be working at cross purposes, a development that would render the works of the investigative panels “as dead on arrival”.

The source advised that the Presidency could yet prevent further damage and acrimony by setting up a judicial panel of inquiry to investigate the matter and enjoin the leadership of the Army and the Police to view the issues from a more matured perspective order than the panic measures being adopted in the military and security circles.

BBNaija: ‘Met Police expecting me back at work’ – Khafi

”Nothing can break me” Bobrisky says after police disrupts his birthday…