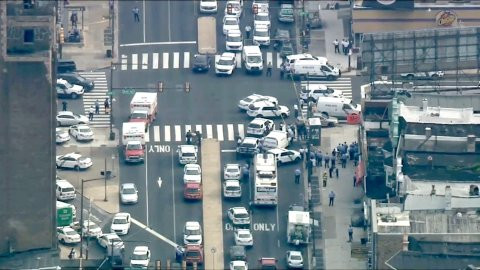 A gunman has been arrested hours after he got into a shootout with police officers who arrived at a home in Philadelphia to arrest him on a drugs warrant.

The shootout started at about 4:30 pm local time and lasted for about 5 hours during which the gunman injured several police officers trying to arrest him.

Two officers were trapped inside the house with the man for around five hours but were eventually freed by a SWAT team at night.

Other officers were forced to jump out through windows and doors to get away from a barrage of bullets.

Police sergeant Eric Gripp confirmed this morning that the gunman had finally been taken into custody. He also said six officers were hit by bullets but have been released from hospital.

Three people that officers had taken into custody in the house during the drug raid before the shooting started were also safely evacuated, police said.

Ross added: “It’s nothing short of a miracle that we don’t have multiple officers killed today.”

During the shootout, police reasoned with the gunman to surrender and even put his lawyer on the phone with him to try to persuade him to give up.

As the shootout was in progress, Temple University locked down part of its campus, and several children and staff were trapped for some time in a nearby day care.

During the standoff Commissioner Ross said: “We’re doing everything within our power to get him to come out. He has the highest assurance he’s not going to be harmed when he comes out.”

Police tried to push crowds of onlookers and residents back from the scene. In police radio broadcasts, officers could be heard calling for backup as reports of officers getting shot poured in.

He added: “I’m a little angry about someone having all that weaponry and all that firepower, but we’ll get to that another day.”

I Almost Committed Suicide Because Of The Slavery Deal I Signed With Akon, Samklef Opens Up

Settle For Older Men When You Want To Get Married, Gospel Musician, Empress Gifty Advises Ladies