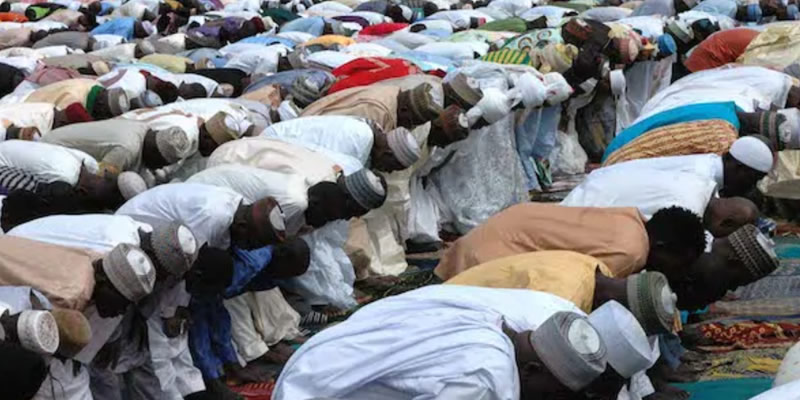 Residents of North-East Nigeria have expressed joy over the peaceful celebrations during the Eid celebrations. This much was gathered when our reporters visited communities in the various states in the North East.

The atmosphere was calm with Muslim faithful’s going about their Sallah celebrations without fear from harassment and intimidation.

In the communities visited in Borno State, the resident expressed delight that the Boko Haram terrorist was not able to disrupt their festivities, unlike in times past where bombs would detonate in religious centres and other places where people are gathered. According to the district head of Baga, Mallam Shehu Garba, he stated that this year’s Sallah celebration was one of the most peaceful his community has experienced in recent years.

“It was an enjoyable and peaceful celebration for us as we went about our normal businesses. However, if not for the presence of the Army who kept watch over our community day and night, we were not sure of what would have happened, especially from the Boko Haram boys.”

He also stated that the Nigerian Army personnel stationed in the district assured them that there would be no disruption of the festivities. “Soldiers came to us days before the Sallah to ask for our support by reporting suspicious faces and movements and that they were on ground to foil any attempt by the Boko Haram boys to disrupt our celebrations. Also, true to their words, all went well, and we are very grateful to the Nigerian Army.”

In Maiduguri Metropolis, residents went about the festivities with excitement. A couple of people interviewed expressed satisfaction with the way and manner the Nigerian Army was able to prevent any form of disruption of the festivities by Boko Haram terrorists. Mallam Ali Goni, a tea seller, stated that for him, this is the most peaceful Sallah celebration he has witnessed in recent times. He said that people stayed out late into the night without fear.

“This year’s Sallah was very nice to all of us. We prayed to Allah to protect and save us from the hands of the bad people, and Allah did it for us. We also thank the soldiers who were patrolling everywhere from morning till night,” he said.

This same sentiment was expressed across other parts of the state where resident chanted “Sai Baba” when our reporter interviewed them. According to them President Muhammadu Buhari indeed gave them a perfect gift for Sallah by ensuring that there were no attacks by Boko Haram fighters or suicide bombers.

“President Muhammadu Buhari is a good man that has the interest of the masses at heart because there is nothing like peace of mind. You can have plenty to eat and drink, but without peace of mind, everything is useless. So we thank him for providing us with adequate security during the Sallah” says Alhaji Garba Gubio, the head of the tricycle operators in Maiduguri.

Mallam Ali Goni, a worker in one of the ministries in Borno state, commended the Nigerian Army for the display of professionalism throughout the duration of the festivities. He stated that if all critical stakeholders can maintain this tempo, then lasting peace would return to Borno state and its environs in good time.

“Most of us have come to understand if all stakeholders can lend their support to the Nigerian Army; the fight against Boko Haram would have been long concluded. However, again, the play of politics by some stakeholders are undermining the efforts of the Nigerian Army, and we believe that with time, these challenges shall be overcome.”

Similarly, in a chat with religious leaders in other parts of Borno State, they stated that the efforts of the Nigerian Army in ensuring that the Sallah celebration was without skirmish is highly commendable.

“The Borno State religious’ council is highly appreciative of the efforts of the Nigerian Army in ensuring that the Boko Haram insurgents did not thwart our Sallah celebrations and that no life was lost throughout the period.”

“This is one of the best Sallah celebrations for us in North-East Nigeria because people were not stopped from freely practicing their religion, there were no bomb blast, women and children were not kidnapped or harassed and no gunshots anywhere.”

The Borno State traditional council in its goodwill message to the people during the festivities appreciated the efforts of the Nigerian Army in the restoration of peace in the state and encouraged the hierarchy of the Nigerian Army not to relent in its efforts at ensuring that all citizens are protected at all times.

According to one of the officers interviewed, he stated that they were carrying out the directive of the Chief of Army Staff to ensure that they win the heart and minds of the local by feasting and interacting with them.

“What we are simply doing is an attempt at winning the heart and mind of the locals in line with the directive of the Chief of Army Staff. This is so because the use of force is not the only strategy for the war. You must have the locals on your side at all times, and this much the Nigerian Army has been doing through our cooperate social responsibility initiative.”

The officer also stated that as part of the CSR initiative of the Nigerian Army, there is a constant visit to liberated communities to assist those that have returned to settle down by helping in reconstruction work, the provision of amnesties such as water.

“The Nigerian Army has been fully involved in assisting returnees to liberated communities. As a fact, the Chief of Army Staff routinely visits these communities unannounced and away from the press to interact with locals as well as troops stationed in these communities.”

“This strategy has paid off for the operations of the Nigerian Army in the fight against Boko Haram terrorist as the locals are happy with our operations and provide information to us whenever they notice strange faces in their communities.”

In addition, a security expert, Dr. Chuks Obigwe has stated that the security situation in North East Nigerian can be improved tremendously if other critical stakeholders support and emulate the novel strategies introduced by the Chief of Army Staff in the operations of the Nigerian Army in North-East Nigeria.

“From reports we have gathered from the theatre of operations, it is just a matter of time before North-East Nigeria would be free from Boko Haram/ISWAP terrorist if the relevant stakeholders in International NGO, humanitarian organizations, agencies, and others lend their support to the Nigerian Army.”

“Worthy of mention is the need for these stakeholders to emulate the Nigerian Army in helping those that have returned to their communities to settle down to overcome their pains and begin their lives.”

Dr. Obigwe was also of the opinion that if others emulate the Nigerian Army, there would be no basis for Nigeria not to overcome its security challenges.

“As a first, the mind-set of those that have been affected by the insurgency in North-East Nigeria must be reoriented through constant interaction and acts of kindness in what the Nigerian Army through its CSR initiatives is doing in these communities.”

“I am aware that the Nigerian Army undertakes medical outreaches, assist in the reconstruction of houses and roads in these communities. This is very commendable, and if other stakeholders can do the same, substantial progress would be recorded, and Nigeria would be better for it.”

It would be recalled that the Nigerian Army recently launched a campaign of winning the heart and minds of those affected by the Boko Haram insurgency in North-East Nigeria by undertaking various Corporate Social Responsibility Initiatives in liberated communities in North-East Nigeria.