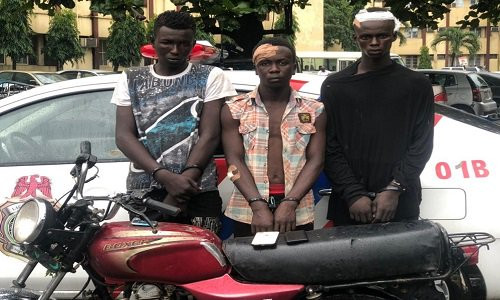 Three suspected traffic robbers terrorising Ikeja and its environs have been arrrested by Operatives of Lagos State Rapid Response Squad.

The suspects, Issa Jidda, 15, Alli Jumah, 19, and Adamu Mohammed, 22, were arrested around Olowopopo Way in Ikeja shortly after dispossessing two women of their belongings, including phones, at Agidingbi and Isheri.

One of the uspects said himself and his team have been operating since May.

“We have been operating since May. I was invited to join the gang by Adamu. He is the leader of the gang. I have gone out on robberies with them seven times. Our targets are phones, wallets and jewellery. We also rob in traffic, especially on Long Bridge.

“We avoid operating at Kara because we live there. Our neighbours may see us. We sell the phones and share the money. The motorcycle we use is owned by Alli. The three of us operate on it, using a knife and dagger as our arms,” Jidda told police

The suspects have been transferred to the Special Anti-Robbery Squad (SARS) for furtherinterrogations and would be charged to court soon.