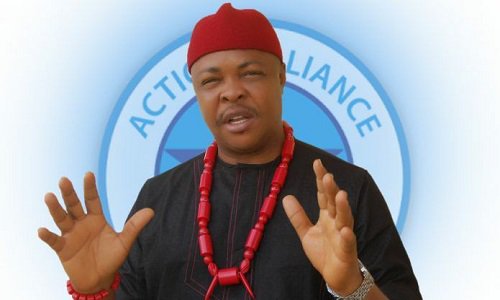 The embattled National Chairman of the Action Alliance (AA), Kenneth Udeze, was on Monday remanded in prison after he was arraigned by the Police in Osogbo, Osun State.

Udeze who was recently sacked by the leadership of the party, was arrested on Friday by operatives attached to Zone 11 of the Nigerian Police Force, with Headquarters in Osogbo, the Osun State capital.

The report of his abduction was making the rounds after his wife raised the alarm that he has been kidnapped before the Police confirmed that he was not kidnapped but was arrested.

Udeze is facing charges of criminal actions against the party, including fraud, conspiracy and forgery.

According to highly placed member of the party, who pleaded anonymity,  “Udeze has been subject of criminal investigation by the Nigeria Police on crimes bordering on conspiracy, forgery, fraud and other offences unbefitting of a person who parades himself as a member of our great party”.