The CEO of NairaBet/Lawmaker representing the Egbeda/Ona Ara federal constituency at the National Assembly; Akin Alabi has announced the death of his father; Chief Adediran Alabi at the age of 85.

Akin Alabi shared the sad news this morning on Instagram. He wrote;

I lost my dad, Chief Adediran Alabi earlier this morning. He was 85. 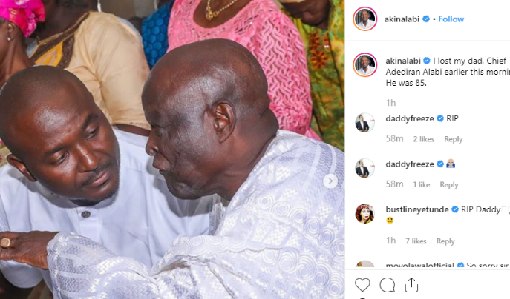 In related news, former President of Zimbabwe Robert Mugabe is dead. He died in Singapore aged 95, as confirmed on twitter by current President Emmerson Mnangagwa

“It is with the utmost sadness that I announce the passing on of Zimbabwe’s founding father and former President, Cde Robert Mugabe.