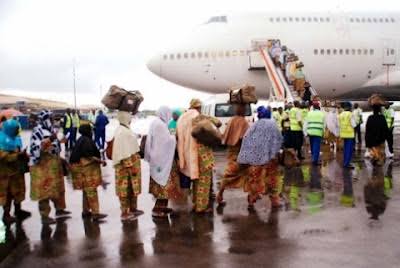 Tragedy was averted on Saturday, when a Max Air aircraft bringing over 509 Muslim pilgrims back from Mecca in Saudi Arabia suddenly developed a technical fault while attempting to land at the Minna airport in Niger State.

According to information gathered, the pilot of the troubled Boeing 744 plane having struggled to stabilise the aircraft was able to make a forced landing which caused serious damage to one of the aircraft’s engines.

The aircraft due to the impact of the force it landed with, destroyed part of airport runway while it skidded off the runway creating panic among pilgrims on board.

A senior airport officer who spoke under anonymity declared that if fire had broken out that it would have been disastrous as the airport lacked standby fire fighting facilities.

Officials from the Accident Investigation Bureau have dispatched inspectors to the airport to ascertain the remote cause of the incident.

An official from the state’s pilgrim board also confirmed the incident.