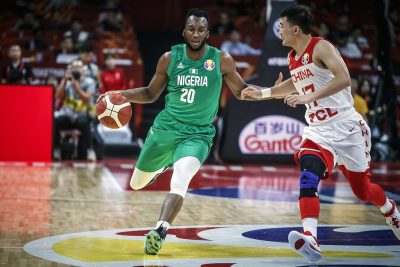 Alex Nwora’s men grinded out their third win at the 2019 FIBA World Cup in a difficult way, silencing the vociferous home fans that dominated the sellout crowd inside the Guanzghou Gymnasium.

Nwora named an unchanged line-up from the side that defeated Ivory Coast in the previous game with Ben Uzoh, Ike Diogu, Ekpe Udoh, Josh Okogie and Aminu Al-Farouq all starting.

FIBA World Cup; D’Tigress Crash Out After Losing 40-71 To USA In…

D’Tigers led 35-31 at the end of the first half with Udoh and Farouq proving their class.

The competitive nature of the game continued in the second half of game, but the Nigerians were top of the tight competition.

In the end, D’Tiger’s prevailed 86-73 and will now feature at the 2020 Olympic Games after finishing tops in the Classidication Group M of the 2019 FIBA World Cup on eight points.

Why Buhari should immediately vacate office as President – PDP

FIBA World Cup; D’Tigress Crash Out After Losing 40-71 To USA In Quarter-finals.