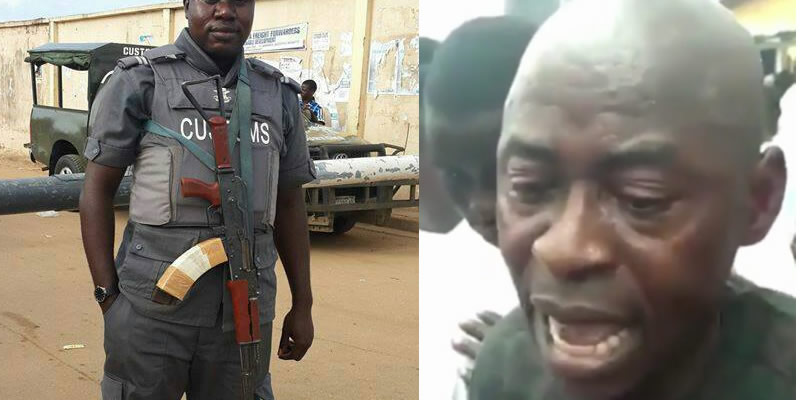 A yet-to-be identified businessman who owns a rice company situated in Ilorin, the capital of Kwara state has disclosed that Custom officers allegedly stole 704 bags of rice inside his warehouse.

This was contained in a video captured during the protest by the businessman and retinue of staffs to demand for the release of their allegedly stolen bags of rice.

In the video made available to WITHIN NIGERIA where the rice farmer and businessman was explaining how the bags of rice were carted away forcefully by customs officers who barged into his warehouse and steps he has taken so far to retrieve his goods.

The rice farmer who happens to be the head of “Mountolive Made in Nigeria Rice” disclosed that “In the last four years, I have been supporting the cause of Nigerian rice. Men of Nigeria Custom came to my warehouse around 2:00am in the odd hours of the day. They tied my security man, broke my door and carted away 704 bags of rice for no specific reason.

“I have over 10 trailers of purely Nigerian rice. Ask any rice importer in Nigeria, they know that Mount-Olive Nigeria Limited has been supporting as the biggest distributor of Nigeria in Southwest. I have 418 staffs to pay and they have been frustrating me; what exactly do they want? Could it be because I am not booking with them?

He said: I pay my taxes and I pay my taxes. What exactly is my offence? We have communicated with concerned authorities especially the police. One of my staffs was with the Surulere police boss and the Kwara state police commissioner is also aware. The commissioner can not deny that he does not have the customs boss number but why he has not called him is unknown to us.

“I have a warehouse in Ilorin and 23 states across the federation. I already told my wife that I want investigation to be done and if I am found guilty, I would go to jail and my staffs are ready to go to jail too.

He further stressed that “they bursted into my warehouse. They locked my staffs up. I flew to the comptroller in Abuja and one of my friends who happens to be one of the princes of Ilorin was locked up because he appealed that my goods should be returned.

“When asked by one of the reporters on standby that what are his prayers, he said “my goods should be released unconditionally and the presidency should set up investigative team to investigative us and what we are doing if it’s illegal.

Efforts of our reporter to get in touch with Nigeria customs top officials were futile because all lines were unavailable as at the time of the reportage.

Lola OJ reacts to rumors her baby is for footballer, Obafemi Martins