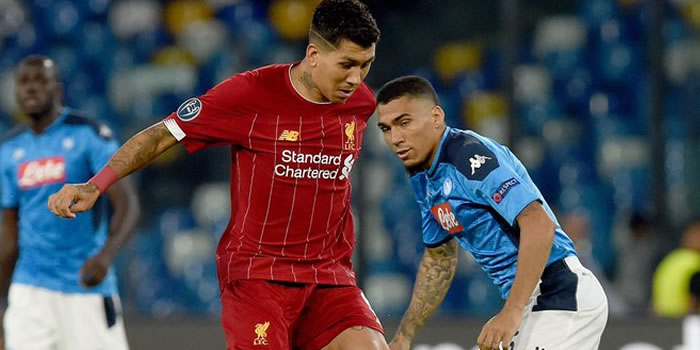 Liverpool bowed to two late goals from Napoli to suffer a 2-0 defeat as the Red’s defence of the Champions League crown started on Tuesday night at the San Paolo stadium.

An 82nd penalty converted by Dries Mertens and a 90th-minute goal by Fernando Llorente ensured that Napoli started on a bright note.

Just before the break, James Milner produced a stunning cross and found Roberto Firmino who got the header, but the ball missed the goal by just a few inches.

This comes just moments after Milner tried to find Firmino but the ball was cleared by Kalidou Koulibaly for a corner kick.

The two sides faced off last season in the Champions League group stage where they were also drawn with Paris Saint-Germain and Red Star Belgrade.

Napoli won at the San Paolo with a goal by Lorenzo Insigne, but Liverpool stood tall at Anfield thanks to Mohamed Salah’s goal.

Jurgen Klopp decided to start Andy Robertson after a late fitness test but made a couple of changes to his starting line-up from the 3-1 victory against Newcastle last Saturday.

Alex Oxlade-Chamberlain and Georginio Wijnaldum were omitted to the bench and have been replaced by Jordan Henerson and James Milner whereas Roberto Firmino has taken the injured Divock Origi’s place.

After a barren first half, Jose Callejo went down after a challenge from Andy Robertson. It didn’t look like there was a lot of contacts but VAR made a quick check and it agrees with the referee.

Dries Mertens stepped up to it and converted nicely before Napoli got another when Van Dijk tried to pass the ball back to Joel Matip but missed wildly and instead finds Fernando Llorente who then beats Adrian with ease.

Another lady killed in a hotel in Port Harcourt, CCTV captures killer (video)