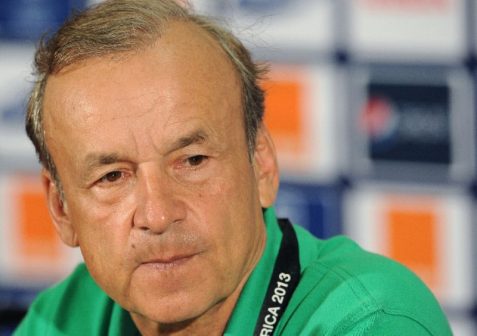 Super eagles coach Gernot Rohr has admitted that the October 13th international friendly against the Selecao of Brazil in Singapore is a very good test for the Super Eagles, even as he vowed to restrict the use of mobile phones and social media while players are on international duty.

The Brazilian Football Confederation (CBF) on Monday disclosed on its website that the reigning Copa America champions will be playing two friendly matches against Africa Senegal and Nigeria on 10 and 13 October respectively with the likelihood that star players like Neymar, Roberto Firmino and Philippe Coutinho would be on parade at the National Stadium in Singapore.

“We are happy about this particular match coming up against Brazil even if they are not an African team that we’re going to play in the 2021 AFCON qualifiers,” the former FC Bordeaux manager.“ Of course, it’s Brazil and as such, it’s a big match for us to be played far away in Singapore; and I hope we can have more than two good training sessions before the match (against Brazil) like we had before the match against Ukraine .”

According to Rohr, international friendly against the traditional soccer nations such as Brazil serves as twin purpose of preparing the Super Eagles for the upcoming continental qualifiers (against Benin Republic at home on 14th November and away to Lesotho on 19th November) as well as improvement of the side’s rating in the monthly FIFA-Coca Cola rankings.

“It would be very important for us to train hard for this match because we have to make a very good game against one of the best teams in the world because a good result will improve our rankings in the world,” noted the 66-year-old coach. “This is going to be a wonderful match for us to play and I hope all our injured players would be available for the match because it’s a very big match.”

In a related development, Rohr informed that the general ambiance around the Super Eagles camp has improved post the 2019 AFCON in Egypt with restriction and use of social media when the players are on international duty.

“Of course, we have better communication and conversations in the team now because the phones are restricted during breakfast, lunch, dinner and during our meetings and I’ve also advised the players against social media which sometimes is not very good,” revealed Rohr.

Meanwhile, match organisers have disclosed that tickets for the two matches between Brazil against Senegal and Nigeria will go on sale today at the SportsHub website.

Within Nigeria gathered that ticket for a single game is priced from $29 ( about N10,150) onwards, while there are special-bundle prices from $49 ( about N17,150)onwards for two games.

Fans may also choose the $299(about N104,650) SuperFan Package, which includes VIP lanyard and pass, access to a dedicated VIP lounge, Centreline platinum tickets with padded seats and drink holders, as well as refreshments.

‘You People Are Bitter Sadistic People’: Toyin Lawani Blasts Nigerians As She Lists Her Achievements