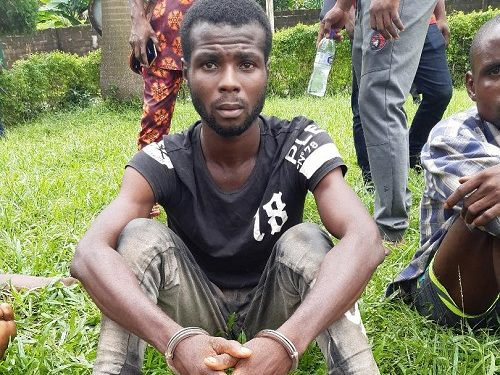 A 30-year-old man identified as Godstime Ogechi who specialises in robbing prostitutes has been arrested by the Edo state police command in Ugbiyoko, Egor local government area of the state.

In a statement released by the Police Public Relations Officer in the state, it stated that Ogechi is a one-man gang that uses a rod-like gun to rob call girls under the pretence of paying them to spend the night with him.

Ogechi takes his victims to a dark street where he would bring out the rod and the girls thinking that it is a gun, would give him their phones and money including the one he paid them, police disclosed.

He met his waterloo during another visit to one of the brothels to pick up a girl and he was sighted and recognised by other call girls.

When interrogated, Ogechi said he has lost count of the number of girls he has robbed.

“I don’t have any gang. I operate along Ekenwan road. I pick street girls at night and rob them. I will chat with them and tell them I want to take them for daybreak. When we get to a dark corner, I will bring out this thing like a gun and threaten them. They will give me their phones. I cannot remember the number of girls I have robbed. I was caught when one of the girls ran away after I have paid her. I went back to the spot I picked her from and demanded for my money. She raised alarm.” he said