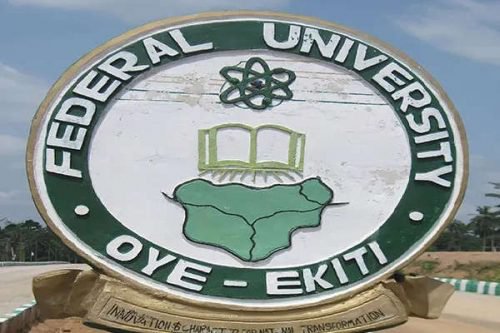 The Federal University, Oye Ekiti (FUOYE) has disclosed that security agencies have started investigating a former Head of Department of Criminology and Security Studies, Prof. Adewole Atere for allegedly impregnating a 16-year-old student of the university.

The Vice Chancellor of the university, Prof. Kayode Soremekun revealed the development during an interaction with the leadership of the National Association of Nigerian Students (NANS) on Friday evening.

The professor, who had resigned from the institution, was accused of impregnating a 16- year old student of his department, Precious Azuka in 2017, which sparked up controversies in the university.

The Federation of International Women’s Lawyers (FIDA) and other human rights organisations had called for Atere’s prosecution for allegedly flouting the child rights law, which prohibited sexual relationship with a minor.

During the interaction, the vice chancellor denied the allegation that the university’s management was protecting the suspect from criminal prosecution.

He said the university did its best as a way of protecting the female student, describing the allegation that he wanted “to cover up the case as a figment of imagination of the peddlers. This is far from the truth.”

The vice chancellor explained that when the issue of the professor who allegedly impregnated a female student was brought up, the then Dean of Students’ Affairs set up a panel.

He said: “Before I could act, we had a senate meeting in which many were very vociferous about the issue. I cautioned them not to overreact. So, we will not be seen as prejudging the case as members of the panel to probe the matter will be drawn from among them.

“If I wanted to save him I would have allowed the senate to continue to vent their anger because it would have amounted to prejudging the case. A good lawyer would have had the chance to extricate the offending professor.

“I subsequently set up my own panel based on the rules of the university. When I saw the findings, I was outraged. I decided to suspend the Professor with a view to putting him before the staff disciplinary committee.

“At that point in time, he threw in his letter which was odd. When I consulted opinion, I was advised that I could not stop him. I am a father of six daughters and I share deeply the pain of the poor girl.

“A well known reverend sister in this university had also approached the girl’s parents. They pleaded that they did not want the case pushed further, probably to protect her image.

“But in spite of that, I still went ahead with the case. So, the security is still probing into the matter and the university is not intending to cover up anything in this matter.”

At the weekend, however, the NANS President, Mr. Bamidele Akpan and management signed a peace deal on how to restore peace to the institution after the killings of two students, Okonofua Joseph and Dada Kehinde during a protest last week.

We almost gave in to pressure of marrying women, Nigerian gay men pen down emotional post