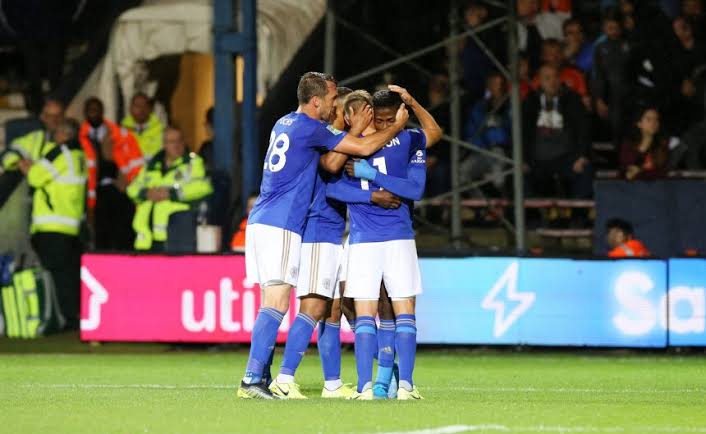 After almost 28 games without getting a goal, Nigeria international Kelechi Iheanacho has finally ended what could pass as his longest goal-drought on Tuesday night.

Iheanacho sealed the victory for Leicester City in their 4-0 demolition of Lutton Town in one of the third round games of the League Cup otherwise known as the Carabao Cup.

The trio of Demarai Gray, James Justin, and Youri Tielemans had given the Foxes a healthy 3-0 lead before Iheanacho added more gloss to the scoreline in the 86th minute.

The Super Eagles striker entered the game as a substitute in the 71st minute. After missing some earlier chances, he finally made his presence count when he chipped goalkeeper James Shea to make it 4-0 for his team.

Another Nigerian star, Wilfred Ndidi, featured in the game against Lutton for 77 minutes.

Elsewhere, Nigeria-born youngster Bukayo Saka made his debut for Arsenal in the League Cup as the Gunners romped to a comprehensive 5-0 victory against Nottingham Forest at the Emirates stadium.

Gabriel Martinelli (2), Rob Holding, Joseph Willock and Reiss Nelson got the goals for Unai Emery’s side.

While Saka made his debut in the competition after replacing the injured Smith Rowe in the 45th minute, teammates Folarin Balogun and Tolaji Bola were both included in a matchday squad for the first time in their Arsenal careers.

Sammy Ameobi came on as a 59th-minute substitute for Forest.

The Super Eagles duo of Oghenekaro Etebo and Alex Iwobi were also in action in the League Cup on Tuesday night.

Etebo came off the bench in the 46th minute as Stoke City were beaten on penalties by Crawley Town at the People’s Pension Stadium.

Iwobi on his part played the full game and even provided an assist as Everton returned to winning ways at Hillsborough, by beating Sheffield United 2-0.