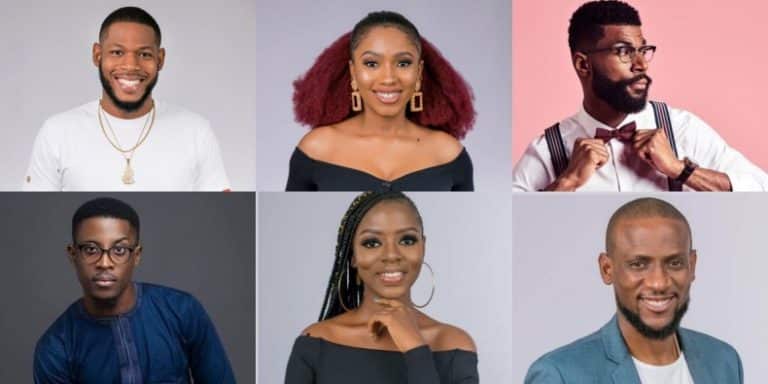 The Pepper Dem season of the #BBNaija reality tv show is winding to an end as we approach the final week and the we have 6 finalists.

The show which started with 22 housemates, saw the inclusion of 4 more housemates mid season. From the diary sessions, the HoH challenge, the veto power challenge to the in house drama we surely had fun and now we have our finalists.

20 evictions and 1 disqualification and the ends here… Frodd, Omashola, Mike, Mercy, Diane and Seyi are through to the finals and they all stand equal chances for the grand prize.

Frodd emergence as the Ultimate Veto power holder, Seyi’s HoH position and Mercy’s immunity made them automatic finalist before the finals.

Diane and Omashola escaping nomination also got through. Mike’s eviction survival also ensured his position as a finalist.

HOH
Oluwaseyi “Seyi” Awolowo has had many highs and lows in his three decades of existence. The bubbly entrepreneur once tried to commit suicide but has since risen above that dark period of his teenage years and has turned his life around. He is committed to his journey of self-acceptance, his girlfriend and his beliefs. He demonstrates the latter with a “Jesus’’ tattoo across his arm. Seeing his own face on a billboard for the first time is one of the highest moments of his life so far.

What irritates you most about other people: Fake people and those who lack of originality.

What will you do with the prize money: Invest in my company. May also help a charity or two.

Why will you be a fan favourite: I’ll stand out from the rest of the Housemates.

Diane Yashim describes herself as an easy going girl whose favourite outfit is a shirt, trousers and sneakers. The model and aspiring cook is also a graduate of the University of Debrecen in Hungary. Studying and living there was an eye-opening experience she’ll forever be grateful for. One of the highlights of her life is being chosen as a Big Brother Naija Season Four Housemate and she says that nothing would make her quit the game. She adds that she likes to try new things and wants to see the whole experience through.

What irritates you most about other people: Liars and loud talkers.

What will you do with the prize money: Travel as well as try to get into the entertainment industry as an actor or television presenter. I will also go back to school.

Why will you be a fan favourite: I’m an open book, I believe I’m relatable and people will understand me easily.

Mike Edwards is a husband, CEO and athlete who doesn’t know how to quit. The highest point in his life was the day he got married to the love of his life.

Mike owns the first Black-owned cigar line in the United Kingdom and he’s also a professional athlete. The lowest point in his life was when he was banned from representing Nigeria at the 2018 Commonwealth Games. He’d still come to the Big Brother Naija House even if he had a million dollars because he never backs down from a challenge.

What irritates you most about other people: Negativity.

What will you do with the prize money: I would continue to grow my business.

Why will you be a fan favourite: I am positive and I have a keep it real personality.

Chemeka Frodd Okoye is a soft-spoken Investment Adviser and Sales Executive from Anambra State. The 28-year-old believes family is everything and that’s why he lists paying for his mother’s surgery bill as one of the proudest moments of his life. He says nothing can make him quit Big Brother and even if he had a million dollars, he would still participate in the game because “the experience can never be bought.”

What irritates you most about other people: Pride, fake people and bullies.

What will you do with the prize money: Start a fashion line and an NGO for single mothers.

Why will you be a fan favourite: I have my charms.

26-year-old Mercy Eke is a video vixen and businesswoman based in Lagos. She loves cooking, swimming, travelling and dancing. No matter the setbacks, Mercy always picks herself up and does her best. “I’m grateful for each and every day. Being alive today is already the highest point of my life”. When she’s not dancing, singing or rapping, Mercy makes time to enjoy her favourite food: white rice and pepper soup. If she had a million dollars in her account, would Sugar still be in the BB Naija game? “Yes, I would. I want the fame. The popularity is very important for my business”.

What irritates you most about other people: I dislike people who are proud.

What will you do with the prize money: I want to start my own fashion brand or label.

Why will you be a fan favourite: I’m a fun person and I’m a sweet girl. Some people call me “Sugar”. Plus, I can be crazy!

Model and Entrepreneur Omashola is originally from Delta State but now calls Lagos home. He loves playing basketball, cooking and “being in the water, even though I can’t swim”.

Putting his life’s motto “If you want it, go get it – don’t just sit down” into action this year, Omashola got down on one knee and proposed to his girlfriend. But the worst happened; she turned him down! Now single and focused on building his brand, Omashalo comes into the Big Brother Naija House ready to make his dreams come true.

What irritates you most about other people: I hate liars.

What will you do with the prize money: I will invest and triple it in less than a year.

Why will you be a fan favourite: Because I’m different, I’m special and I have a story to tell.

Whom do you think will win?