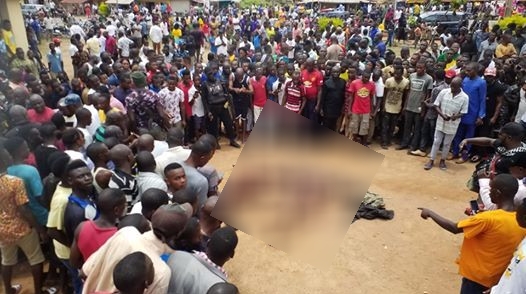 Brutal is an understatement to depicits the raw jungle justice melted on three suspected armed robbers as they were beaten and stripped naked by angry mob in Gbaste community of Ushongo Local Government Area of Benue State.

WITHIN NIGERIA learnt that no fewer than 16 dead persons allegedly murdered by a gang of serial killers were discovered in Gbatse community.

According to reports, witnesses said the trio attacked occupants of a vehicle coming into the state from Cross River State at an illegal check point they mounted near the residence of the District Head of Mbayegh, Chief Nathaniel Hoyo.

It was further learnt that the traditional leader mobilised youths of the community and alerted the police as they chased the suspects who ran into the hills in the surrounding area and hid in one of the caves, but luck ran out on them, when the youths apprehended the three culprits. It was gathered that police efforts could not stop the angry mob who hurled stones at the suspects.

Family of three killed by thunder strike in Benue

Witnesses said the suspects were killed in the process as the youths dragged them along the road before the police eventually took custody of their corpses and displayed same at the Ushongo police station.

Spokeperson of the Command, Catherine Anene, who confirmed the incident said that the robbers are part of the robbery syndicate (serial killers) that are in custody.

Anene added that the police were actually exchanging fire with the robbers when they took to their heels and hid in a cave. During the search for the robbers, the mob located them before the police and lynched them but that the armed robbers had earlier shot one of the travellers who is now receiving treatment.

“The robbers are part of the robbery syndicate (serial killers) that are in custody. The three corpses have been deposited at the Teaching Hospital in Makurdi,” she added.