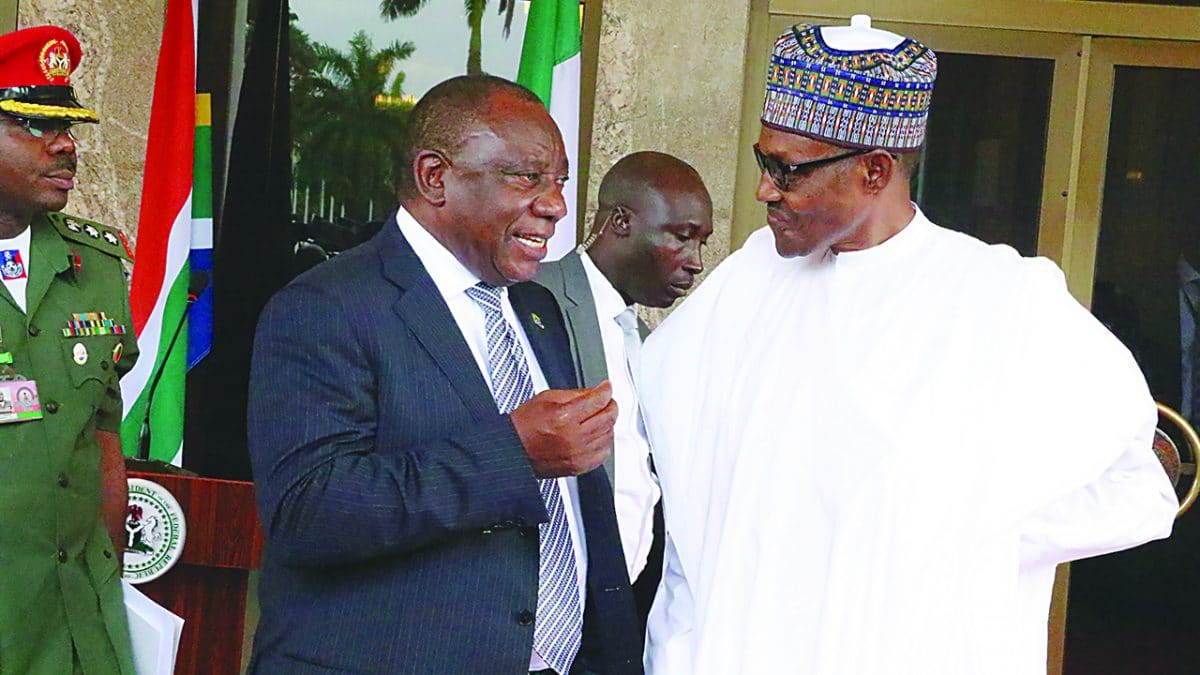 President Buhari was recently hosted to a banquet held by South African president, Cyril Ramaphosa. During the event, the president gave a speech.

President Muhammadu Buhari earlier said on Friday in Pretoria that the wave of deadly violence against foreign nationals including Nigerians in South Africa last month was an embarrassment to the continent.

Your Excellency, Cyril Ramaphosa, President of the Republic of South Africa,

Your Excellency, David Mabuza, Deputy President of the Republic of South Africa,

It is a great pleasure for me to address you tonight.

2. I would like, first of all, to thank you, my Brother, President Ramaphosa, for inviting me and my delegation to your beautiful country. We have been overwhelmed by the warm hospitality of the South African people since our arrival. Thank you very much also for this very generous and sumptuous banquet in our honour.

3. Mr. President, I wish to thank you for taking the initiative to convene this Bi-National Commission. It has been six years since the last meeting of the Commission. Of particular significance is the decision we took to elevate our Bi-National Commission to the level of Heads of State, and it is an honour and source of pride for me to participate in this maiden edition.

4. It is important to highlight that this is the only Bi-National Commission that Nigeria has with any country that is co-chaired at this level, reflecting the strategic and special nature of the relationship between our two countries.

5. We believe that a strong strategic relationship between Nigeria and South Africa can become the engine for the rapid economic, political, social, cultural development of Africa, thereby delivering the Africa we want.

7. Under the former Chairperson of the African Union Commission, Dr. Nkosozana Dlamini Zuma, a great daughter of South Africa and indeed Africa, African Heads of State and Government signed the 50th Anniversary Solemn Declaration during the Golden Jubilee celebrations of the formation of the OAU/AU in May 2013.

8. The Declaration marked the re-dedication of Africa towards the attainment of the Pan-African Vision of an integrated, prosperous and peaceful Africa, driven by its own citizens, representing a dynamic force in the international arena. Agenda 2063 is the concrete manifestation of how the continent intends to achieve this Vision within a 50 year period from 2013 to 2063.

9. Agenda 2063 encapsulates not only Africa’s aspirations for the future but also identifies key Programmes which can boost Africa’s economic growth and development and lead to the rapid transformation of the continent. It is in this context that a number of flagship projects, which represent building blocks towards the Africa we want, were launched. These include:

a. ESTABLISHMENT OF THE AFRICAN CONTINENTAL FREE TRADE AREA (AfCFTA);

b. THE AFRICAN PASSPORT AND FREE MOVEMENT OF PEOPLE; and

10. Before Agenda 2063, there was The New Partnership for Africa’s Development (NEPAD), an initiative of the former Organisation of African Unity (OAU) that came into being in 2001 with South Africa, Nigeria, Egypt, Senegal and Algeria as its sponsors.

11. I have highlighted these two landmark initiatives to show that Nigeria and South Africa not only share the same vision for Africa and its peoples but have been close partners in the formulation and implementation of this vision.

12. Going further back in recent history, during the dark days of the fight against apartheid, Nigeria was formally designated a Frontline State, notwithstanding the fact that we were not geographically in Southern Africa. It was rather in recognition of the political, human and material support and sacrifices of the Nigerian Government and people.

13. Nigerian workers, students and the Government made great contributions and stood shoulder to shoulder with the peoples of Southern Africa in their struggles against colonialism and apartheid.

14. We hosted several South African students in our universities, including for a while, Teboho “Tsietsi” MacDonald Mashinini of the Soweto uprising fame. Nigerian students and workers contributed money from their salaries and stipends for the cause of Southern African liberation.

15. In 1979, Nigeria nationalized Britain’s shareholding in British Petroleum Nigeria for, among other reasons, doing business with the apartheid regime in South Africa, as well as its policies in the then Rhodesia, which had a serious adverse effect on British economy.

16. We in Nigeria are very proud that we stood with the people of Southern Africa in their hour of need. As they say, “A friend in need is a friend indeed.” We are also very proud that together with South Africa and other African countries, as brothers and partners, we are today charting an exciting new path towards the Africa we want.

17. This high-level Bi-National Commission is an important framework for our two countries to institutionalize our partnership and to address concretely every aspect of that relationship. In recognition of that fact, we have come with a large delegation which includes Governors of 3 of the 36 states of Nigeria, the Ministers of Foreign Affairs; Defence; Interior; Industry, Trade and Investment; Mines and Steel Development; Police Affairs; Power and the Chairperson of the Nigerian Diaspora Commission.

18. As the two largest economies on the continent, there are many areas in which we can share experiences, invest and cooperate. Ours is a relationship full of potential and promise and this can only be a win-win for our peoples and for Africa at large.

19. The Bi-National Commission will also make it easier for us to keep on the same page as we march forward, hand in hand, as one people with a shared vision and one destiny.

20. Mr. President and dear brother, as I said, you have overwhelmed me and my delegation with your legendary South African hospitality. I would like therefore to seize this opportunity to formally invite you to pay a state visit to Nigeria for a return match where we as the Super Eagles will surely revenge against you the Bafana Bafana!

I thank you very much.