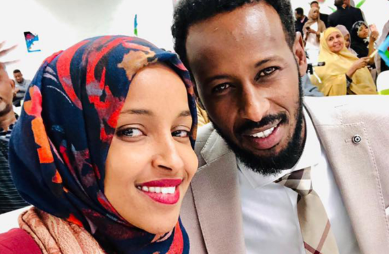 US lawmaker, Ilhan Omar reportedly files for divorce from her husband, Ahmed Hirsi

WITHIN NIGERIA learnt that the US lawmaker and her husband have been together on and off for more than 17years although they have only been legally married for 21 months.

According to reports, the four-page divorce filing sites an irretrievable breakdown of the couple’s marriage, but does not mention personal assets.

The divorce filing comes six weeks after Omar was accused in a Washington D.C. divorce filing of having an affair with her political consultant, Tim Mynett, and breaking up his marriage; an allegation she denied in a WCCO interview in August.

“No, I am not [separated from my husband], and I have no interest in allowing the conversation about my personal life to continue and I have no desire to discuss it,” Omar said.

Mynett also denied that there was “any physical or sexual relationship” between him and Omar. Through attorneys, Rep. Omar has said that the $200,000 her campaign paid Mynett’s company was for legitimate political work, and is in accordance with Federal campaign laws.

Omar is asking for joint custody of the couple’s three children, and that child support be awarded in the best interest of the children. Omar’s attorney, Jaime Driggs, released a statement on behalf of Omar saying:Ilhan has filed for divorce from her husband Ahmed. As with all marriages, this is intensely personal and a difficult time for their family. For years, Ilhan and Ahmed have been the object of speculation and innuendo from political opponents and the media.

This has taken a significant toll on Ilhan, Ahmed, and their three children. Just like any other family navigating this kind of transition, Ilhan wishes to have their privacy respected for themselves and their children and will not be commenting any further.

In June, Omar was ordered to repay thousands in taxes for filing joint married tax returns with one man while legally married to another.