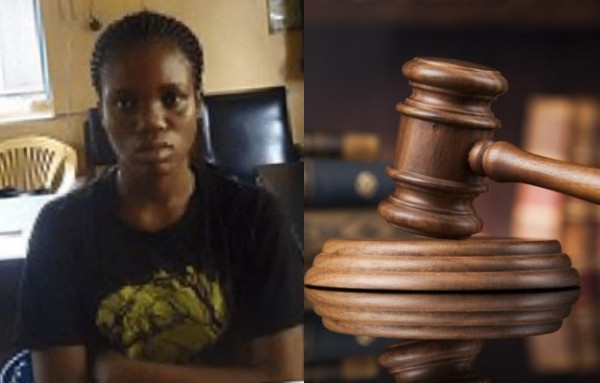 Lady jailed after killing her fiance over engagement ring

Ikeja Special Offences Court have sentenced one 27-year-old Blessing Edet to 10 years imprisonment for killing her fiancee during a fight over engagement ring.

WITHIN NIGERIA learnt that the 33-year-old Edet Ebong was killed by her fiance because she refused to wear an engagement ring given to her by her fiance, Blessing Edet.

According to New Telegraph reports, Edet was convicted on a commuted sentence of involuntary manslaughter after being arraigned before Justice Oluwatoyin Taiwo, over the offence committed around 12:15 am on August 18, 2015 at her apartment in Lekki area of Lagos state.

While explaining her side of the story in court on February, 7, she said the deceased wanted her to cook for him by midnight but she refused because she was tired.

“Upon hearing that I was tired, he went into the kitchen and saw the engagement ring he had given me beside the stove. He became angry and asked why I was not wearing the ring.

“He broke a mirror and used part of it to stab me, I was bleeding and I was crying out to the neighbors for help,” she said.

Edet confessed that she stabbed Ebong in the abdomen with a kitchen knife during the fight.

“By stabbing the deceased in the lower part of his abdomen, she did not intend to cause grievous harm to the defendant. The defendant has established factors necessary to prove self-defence.

“I find that the defendant acted in self-defence as she was a victim of unprovoked assault. The defendant is not guilty of murder but I find her guilty of the involuntary manslaughter of Edet Ebong.

“Section 227 of the Criminal Law of Lagos State prescribes life imprisonment for the offence of involuntary manslaughter. This is a clear case of recklessness on the part of both the deceased and the defendant.

“I hereby sentence the defendant to 10 years imprisonment with no option of fine. The sentence will take effect from the month of August 2015 which is when she has been in custody.”