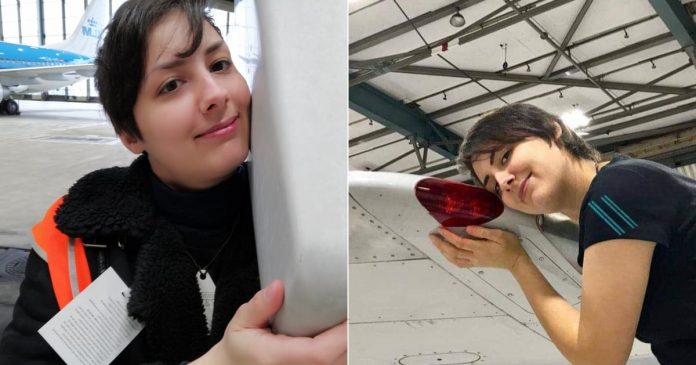 A German lady has caused some sort of controversy that has left people scratching their heads after she claimed to be in love with an Aeroplane. The lady, identified as Michele Köbke wants to marry an aircraft after having dated it for five years. According to experts, the woman suffers from a mental condition known as objectophilia.

A 30-year-old woman claims to be in love with an aeroplane and wants to marry it. The smitten woman says she’s been in a five-year relationship with the plane.

Michele Köbke from Berlin in Germany claims to be dating a Boeing 737-800 passenger jet and even refers to it as “darling”. Speaking to Sun UK, the woman said she finds the plane attractive. However, Michele admitted that being in a relationship with the flying machine can be quite difficult at times.

“I want to marry my sweetheart and live with him in a hangar – it’s just a special kind of love that doesn’t hurt anybody.”

She realised her love for planes when she took her first flight in 2013. The next year she boarded a 737-800 and it was love at first sight. She says the plane is everything she needs and keeps her happy.

According to experts, Michele suffers from objectophilia, a condition in which a person has a romantic attraction to inanimate objects.

This came after continuous pressure from her family to settle with a good man. The event occurred on her 32nd birthday in the Kampala, the capital of Uganda, on her visit home.

Nobody owes you, own up to your mistakes, Yemi Alade’s record label boss, Taiye Aliyu tells Cynthia Morgan