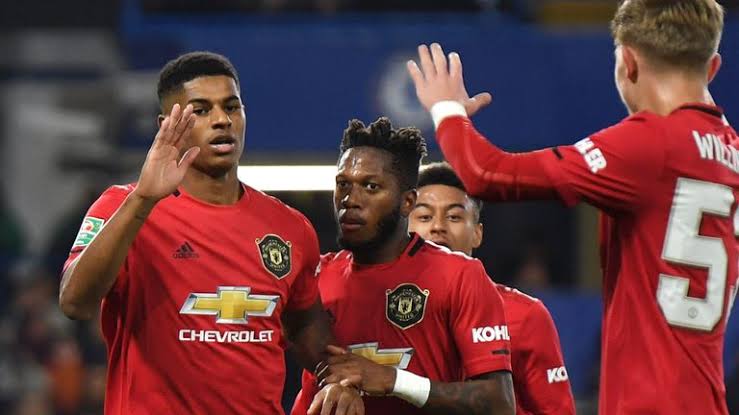 Manchester United booked a place in the EFL Cup quarter-finals with a 2-1 win over Chelsea at Stamford Bridge on Wednesday.

A penalty and a spectacular free-kick from Marcus Rashford sealed a third away win in a row in all competitions for Ole Gunnar Solskjaer’s side.

Michy Batshuayi had drawn Chelsea level but Rashford struck in sublime fashion just as the home side looked to be building momentum, inflicting a first defeat on Frank Lampard’s side since the 2-1 loss to Liverpool on September 22.

United were growing in confidence and Rashford broke the deadlock with a firmly struck spot-kick in the 25th minute after Marcos Alonso had rather clumsily bundled into the back of Daniel James.

Callum Hudson-Odoi had a quiet first half but should have leveled the scores for Chelsea five minutes into the second, the winger failing to connect properly with Alonso’s low cross with the goal at his mercy.

Hudson-Odoi fired over before Batshuayi showed him how it should be done, racing away from Harry Maguire and Victor Lindelof and blasting a low shot past Sergio Romero from outside the box.

Solskjaer responded by bringing on Anthony Martial and Andreas Pereira in a tactical shift, but it was Rashford who settled the contest 73 minutes in with a sensational 30-yard free-kick that swerved beyond the helpless Willy Caballero.