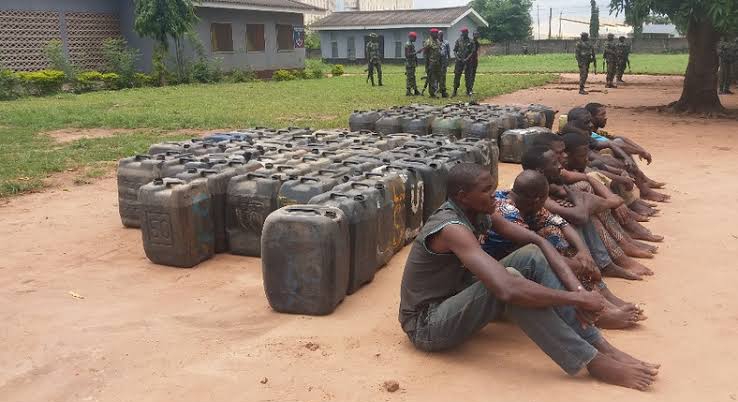 Five suspected pipeline vandals have been arrested on Thursday, October 31st by the Nigerian Navy operatives attached to the Forward Operating Base (FOB) for being in possession of 136 jerry cans laden with Premium Motor Spirit (PMS).

The suspects identified as Oseni Noah, Toyin Hunsa, Rasheed Amish, Kamoru Ishau and Ibrahim Ojogbele were handed over to officials of the Nigeria Security and Civil Defence Corps (NSCDC).

WITHIN NIGERIA learnt that the suspects were apprehended by naval personnel attached to the FOB along Badagry creeks in the course of transporting the stolen products on a wooden boat towards Benin Republic.

While reacting to the incident, Commander of the FOB Badagry, Capt. Tamuno Senibo disclosed that the suspects were intercepted by a navy boat on routine patrol and further revealed that the boat has 136 jerry cans of 25 litres capacity of suspected PMS.

“The estimated volume of this product is about 3,400 litres, while the boat and out board engines remained seized. It is believed that the product was stolen from one of NNPC pipelines that runs from Atlas Cove, in Apapa to Ejigbo and Mosimi depots in Lagos and Ogun States.

“It is very important to state that the Atlas Cove is very strategic to the country for its refined reception of petroleum product and distribution to other NNPC depots in Ore, Shagamu and within the western part of the country. Consequently, the facility has become very attractive to vandals who go there to steal the product and pirates alike,’’ he said.

He further stressed that the arrest represented a very important achievement of the navy’s constitutional mandate and a set back to the logistic requirements of the criminals.

“The Base will continue to dominate the nation’s waterways in order to prevent the theft of our common wealth. The product is believed to have been collected from a vandalised pipeline. The suspects will be handed over to officials of NSCDC for custody and further investigation,’’ he said.