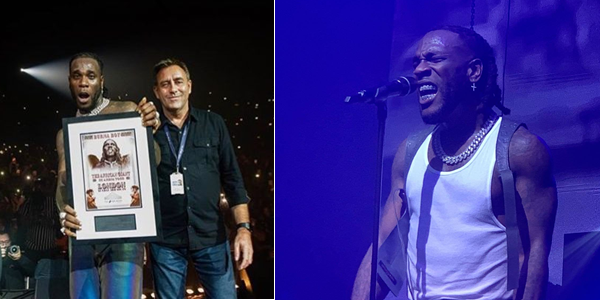 Burna Boy has kept breaking new grounds. On the day that he won the MTV EMA award as Best African Act, the Nigerian singer also became the first Afrobeat star to have a sold-out concert at the SSE Arena, formerly called Wembley Arena.

Renamed the SSE Arena in 2016, Wembley Arena, the ninth largest in the UK is a 12,500-seat facility and London’s second largest indoor arena, after The 02 Arena, where Wizkid had also had sold-out concerts. The 02 Aena can accommodate 20,000 people.

Burna Boy had an unforgettable show on Sunday, making an entry via the mouth of a giant gorilla.

Burna Boy’s mum was brought on stage, amidst cheers from the fans. And Wizkid also made an appearance, sending fans into frenzy.

Watch some of the video clips of the show:

“He Wanted Me To Bring Him To Nigeria”, Burna Boy Reacts To Pop…

“I have never bleached my skin in my life” – Laura Ikeji

“Put some respect on Burna Boy’s name he earned it”, Uti tells…

“I repeat, nobody that is not Fela or my family can ever say they paved any way…

“Burna Boy’s arrogance is one of the reasons I want to sleep with him”, Lady says