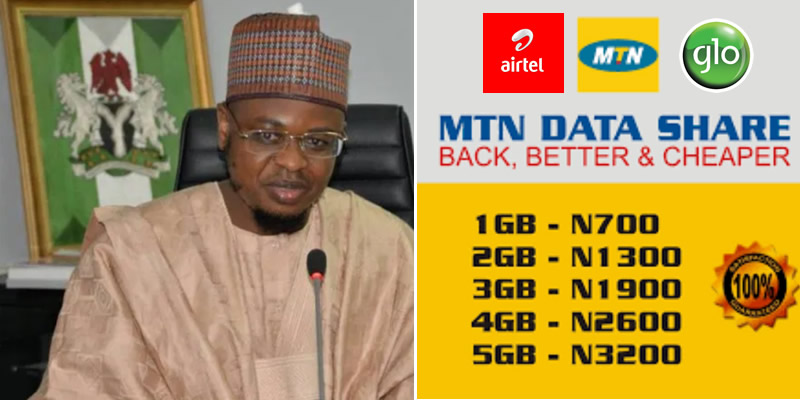 Federal government has extended the deadline given to the Nigerian Communications Commission NCC, on the reduction of data prices in the country.

The Minister of Communication and Digital Economy, Dr Isa Ali Pantami gave this directive in a statement.

It will be recalled that the minister at the presentation of the new Executive Commissioner of NCC this week had directed the regulator to stop all illegal data deductions by service providers and review same downwards within five days.

He had argued that his office was inundated with complaints from concerned Nigerians about the high cost of data compared with countries with lesser population.

Meanwhile, in a statement issued in Abuja on Saturday by the Minister’s spokesperson, Uwa Suleiman, the Minister noted that it had received NCC letter that action is being taken on the matter.

The statement reads : Following the five day ultimatum issued by the Honourable Minister of Communications and Digital Economy, Dr Isa Ali Ibrahim Pantami to the Nigeria Communications Commission (NCC) on the 5th of November 2019, to resolve the challenges of illegal data deductions and review the cost of data downward, the commission has risen up to the task and efforts are in top gear to carry out the Minister’s directives.

“In a letter from the Executive Vice Chairman (EVC), received by the office of the Honourable Minister on the 8th of November 2019, the telecommunications regulator, intimated Dr Pantami of the strategies been taken to stem the tide of short changing subscribers by Mobile Network Operators.

“In its earlier attempts to tackle the challenges, the Commission informed the Honourable Minister that it had issued a directive to all Mobile Network Operators (MNOs) on the attendant penalties associated with Automatic Renewal and Forceful Subscription to Data and Value Added Services. The penalties include considerable financial sanctions on the erring operator.

“The letter stated that, in response to the directive of the Honourable Minister, the Commission reviewed the Nigerian Communications Act of 2003 on its rule-making powers and process. The Commission is in the process of carrying out a study on the End-of-Session Notification for Data Services and depending on the outcome, may issue a direction in accordance with the Act.

“Furthermore, in a bid to protect consumers, the Commission also notified the Honourable Minister of their regulation of the initial directive to include refunds to the consumer in established cases of unauthorized subscription.

“The Nigerian Communications Commission also assured the Honourable Minister that it has been working assiduously round the clock to enforce the Federal Government’s directives and has requested the good graces of the Minister to extend the deadline which expires today, 8th November 2019, to enable it properly re-strategise and fully implement long term solutions as directed, to the challenges.

“Dr Pantami has graciously granted an extension with the understanding that the Commission will resolve these issues within the shortest time possible.

“The Honourable Minister, hereby assures the general public that the current administration will neither tolerate acts of injustice nor the shortchanging of its citizens as it is working tirelessly to ensure that subscribers get full value for their money. “