The authority of Babcock University has confirmed the expulsion of the lady in the viral sex video and described the sex video of its former students as a blessing in disguise for the institution.

WITHIN NIGERIA had earlier reported that hours after assault video of FUTA female student went viral, another shocking video of two students of BABCOCK Univeristy having sex has surfaced online. The two students caught doing doggy-style inside the sex tape have not been identified yet and the person who is responsible for the leakage is unknown.

In a statement issued by the Communications director of the institution, Joshua Suleiman on Wednesday evening; it was revealed that the school has expelled the male student in February 2019 and was undergoing rehabilitation for different destructive addictions.

“We are happy to be saddled with this challenge as an institution because it propels us to contribute to the greatness of this nation and the security of a bright future for our children,”.

The self-consolatory lines followed a barrage of insults directed at the school after two people rumoured to be its students were seen engaging in sex while a camera was rolling.

It was unclear how the video leaked online between late Tuesday and Wednesday morning, but it caught instant social media frenzy and elicited widespread ridicule against Babcock, a church-owned university known for its aggressive and sometimes controversial code of ethics for its students.

Many commenters said the incident was proof that expensive education might not necessarily be an antidote to questionable behaviour by young adults.

The man and woman seen in the undated video were not immediately identified. It appeared to have been shot at a budget infirmary.

The young man in the video was a former student of the school who had been previously dismissed after authorities realised he had become hooked on drugs and other “grievous misconducts”.

“His girlfriend in the same video, until the video broke out, [was] a third-year student of accounting of this university. After due process, she was expelled from the university for violation of university rules and regulations,”.

The school also disabused the public of claims that the video, less than two minutes long, was shot on its campus.

The female ex-student said the incident took place in April at Saint Bridget Hospital, Abeokuta, where her boyfriend was undergoing rehabilitation for his addictions. An Internet search for the hospital yielded no results for Wednesday evening, making it difficult to reach a spokesperson for comment.

“The act did not take place at Babcock University,” it emphasised. “Babcock University remains committed to the highest moral standards and would remain a standard-bearer for quality education in standard character, learning and in service to humanity.” 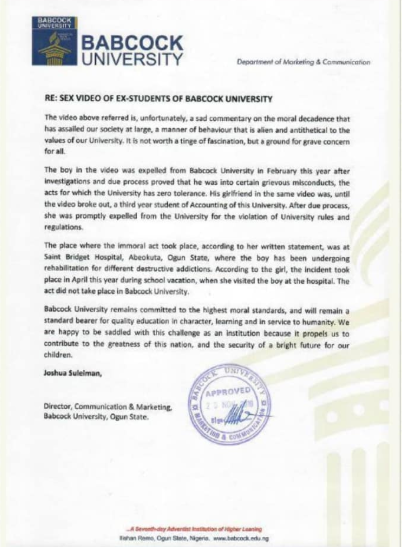