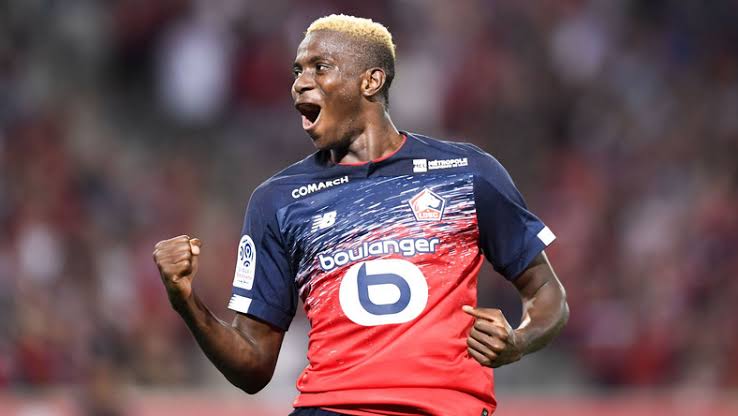 Lille forward, Victor Osimhen netted the winning goal as Lille beat Brest 1-0 in their French Ligue 1 clash at the Stade Pierre-Mauroy on Friday.

The Super Eagles forward who scored the only goal of the encounter collected a pass from Jonathan Ikone to bury the visitors and continue his rich vein of form this season. He also has two assist to his credit.

The Nigerian striker troubled the visitor throughout and had other chances to increase his tally. He has proved to be a good buy and is setting the French league alight.

His latest goal means that Osimhen has netted five match winners for Lille in Ligue 1 this season with Bayern Munich’s Robert Lewandowski and Cirro Immobile of Lazio scoring as much across Europe top five leagues.

The mercurial striker has also been in fine form for the Eagles scoring three goals in the 2021 African Nations Cup qualifiers against Benin Republic and Lesotho after taking over from Egypt 2019 AFCON top scorer Odion Ighalo who retired after the competition.

Osimhen emergence as an upstart was swift following his breakthrough with the Golden Eaglets under Amuneke in 2015 when he broke the long-held FIFA U-17 World Cup goal-scoring record as he scored 10 goals at Chile 2015 to help Nigeria win the historic fifth global cadet title.

He was personally rewarded with the Golden Boot award as the top scorer of the World Cup as well as Silver Ball as the second Most Valuable Player behind compatriot and captain of the side, Kelechi Nwakali. For his efforts in 2015, he was rewarded with the Africa Young Player of the Year in the annual poll by the Confederation of African Football (CAF).

He is also in the running for 2019 CAF Young Player of the Year Award with fellow Eagles forward, Samuel Chukwueze, who plays for Villarreal of Spain.

I Just Can’t Be A Politician Like My Son, Yul, They Tell Lies – Pete Edochie

Cardi B reacts, make promises after a Fan weep as she reveals her parents restricted her from going to the rapper’s Concert in Nigeria