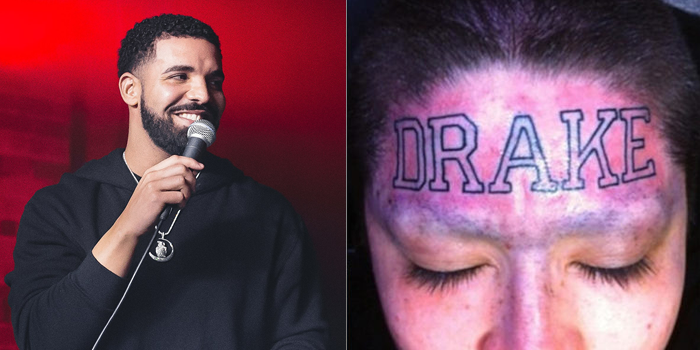 If you’ve missed the entire Drake forehead tattoo fiasco up until this point, here’s a brief summary: Overexcited fan tattoos Drake’s name in all-caps on her forehead, Drake

talks trash to tattoo artist in an interview, tattoo artist makes fun of him. We figured that was as far as this could go until yesterday, when it was reported that Toronto’s finest paid a visit to Kevin Campbell’s LA tattoo shop to “give him a warning.”

Campbell detailed the confrontation via Twitter when someone asked him if the issue had been sorted out. He claimed that Drake’s security guard was sent in to do the talking. “Guess you could call it sorted out.

When Drake was in LA last, he parked out front the shop and sent in his huge security dude,” Campbell wrote in reply, noting that Drake didn’t actually come inside.

Drake In Self-Isolation After Partying With Basketballer, Kevin Durant…

“He should have just let it go, I doubt anything would have come of what he said anyway. It just made him look silly IMO.”

There was a running dialog on Campbell’s account when his other followers began to weigh in, from which we’ve learned that the tattoo community is outraged about “Y.O.L.O.!” “@drake is mad at @kcampbelltattoo and the tattoo world is mad at drake for ruining YOLO , lets call it even eh?.”

When photos of the Drake tattoo first surfaced, Campbell told Vice that he did question the woman about it—“She had the sh—y font all picked out on her iPhone ready to go and was pretty adamant about putting it on her forehead”—then left her to her decision.

Drake felt that wasn’t enough, addressing the photo in an on-air interview, “The guy who tatted is a f—ing –shole though, I will tell you that.

I don’t f— with that guy. F— you to that tat artist by the way. And you should lose your job and should never do tattoos again and I don’t f— with you. And if I ever see you, I’ma f— you up.”

Viral Video: Pastor use goat as point of contact as he leads members in prayers