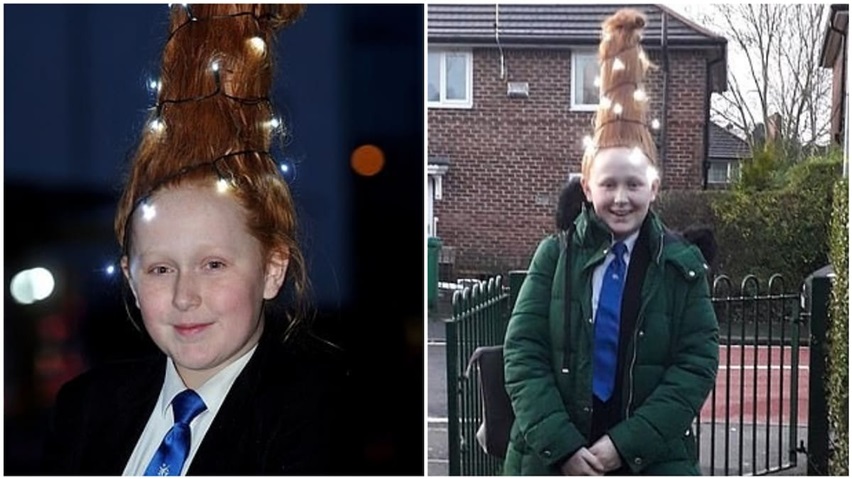 Teenager turns her hair into a Christmas tree, school sends her home

13-year-old Poppy Leigh, turned her hair into a Christmas tree and decorated them with lights and went to school but got sent back home by her school authorities.

According to Daily Mail the girl wrapped her hair around a bottle to achieve the structure of the tree. She was rebuffed by her school, Manchester Health Academy, when she came for lessons with the hairstyle.

Poppy’s mother, Christie Leigh, said her daughter was told to loosen the hair or go home.

The mother said that she is angry with the decision when all her child did was just to get into the mood for Christmas before she goes on break the following day.

The teenager caved in to the school’s demand and loosen the hair.  “I am quite upset really, it’s just Bah Humbug. It’s just a bit of fun and Christmas cheer before she breaks up tomorrow. “She just wanted to make things a bit more exciting. Poppy is always messing around with her hair.

She walked in this morning and said: “Mum, can I do my hair like this for school? It looks like a Christmas tree. “She wrapped her hair around an empty bottle of Volvic water and then she asked me to put the lights in for her,” she said.

Despite the disapproving response from the school, her mother said Poppy received great response from one of her teachers who said the hair was fantastic. Christie said because her daughter loves school so much, she could not come home so she had to pull the hair down. On the other hand, Kevin Green, the school’s principal denied that the school had sent a student home, maintaining that the hair was not appropriate.

Why I approved the recruitment of 10, 000 officers into Nigeria Police Force – Buhari

Man in tears as rats eat his Christmas savings (Video)