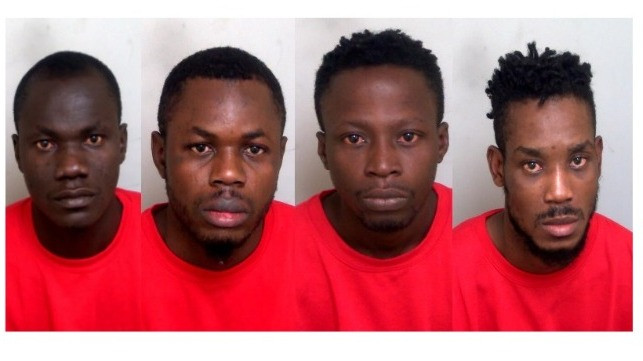 No fewer than four Nigerian stowaways have been sentenced to seven years imprisonment in total by a UK court.

WITHIN NIGERIA learnt that these convicts were found guilty of threatening the crew of the co /ro Grande Tema off the Thames Estuary in 2018.

According to reports, the Nigerian men reportedly broke free five days after being placed on quarantine following their discovery onboard the ship which was under way from Lagos, Nigeria to Tilbury, UK.

Crewmembers who locked themselves on the bridge to ensure their own security and alerted the authorities, also filmed the men making “cut-throat” gestures, threatening them, brandishing metal poles and taking up fighting stances.

It was gathered that after a team from the Royal Marines Special Boat Service were sent in by helicopter to rescue the crewmembers, the men hurled faeces at the elite SBS sailors and vowed to infect them with HIV during a tense stand-off in the Thames Estuary. No one was injured in the 25-minute operation to regain control of the ship.

Upon being arrested, they were charged with hijacking and affray, a UK offense consisting of using or threatening to use unlawful violence. They were however cleared of the hijacking charge and convicted of affray during trial.

While McGee, accused of being the ringleader received a jail sentence of 32 months, Popoola was sentenced to 31 months. Sunday and Jolumi received sentences of 16 months each.

The convicts might serve half of their sentences behind bars and may be detained for deportation proceedings.