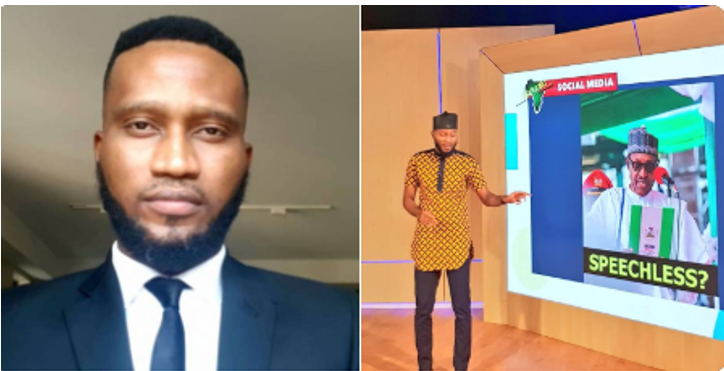 Recall that the former AIT presenter absconded the country in June, 2019 as a result of a clash between the Federal Government and the African Independent Television.

Ohimai Amaize made the disclosure about the asylum in a statement released by him on Sunday, January 19th.

The National Broadcasting Commission (NBC) had earlier threatened to revoke DAAR Communications license over tweets from Nigerians shown on AIT morning show, Kakaai Social which was anchored by Amaize.

The threat was taken into action on June 6 by the NBC and license of Daar Communications PLC, owners of Africa Independent Television (AIT) and Ray Power was suspended.

The NBC had on June 6 suspended the license of Daar Communications Plc., owners of Africa Independent Television (AIT) and Ray Power.

Reacting on the development, the Director General of NBC, Modibbo Kawu said the action was taken for failure of the TV and radio stations to abide by the broadcasting code.

In a letter entitled, “Lack of Responsibility in use of content from social media,” which was addressed to the Group Managing Director of Daar Communications Group, the NBC described the Kakaaki social edition of May 22, 2019, as “treasonable.

Amaize left the country for New York after citing threats to life by security agents as reason and he was later joined by his wife.

“I have just received notice of my asylum approval. My forced exit from Nigeria last year has been a very traumatising experience for me and my family. I am very happy and I thank God for this development. I can now live and carry on with my life without the fear of being persecuted by the Muhammadu Buhari regime for the opinions that I express or the work that I do as a journalist. Of course, I miss Nigeria so much because there is no place like home. I hope that in the not too distant future, Nigeria will return to a true democracy where a free press, freedom of expression and the rule of law are respected.”

The journalist appreciated those who supported him, especially AIT, Committee to Protect Journalists (CPJ), Human Rights First and his American lawyers, Davis Polk and Wardwell LLP.

Farmers and local foodstuff sellers celebrate border closure, say they are getting…