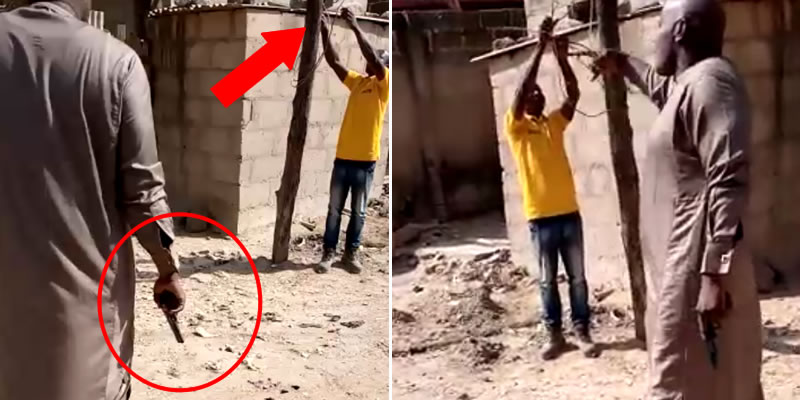 The Custom Boss threatened to shoot the AEDC staff if they fail to restore his electricity supply that was disconnected for an outstanding debt of N227,777:06.

Mr. Ayuba who wore a brown caftan over a brown easy wear pair of shoe with the pistol held in his right hand could be heard in a recorded video beckoning on the AEDC staff with his left hand and with a commanding tone in an admixture of Hausa and English Language to come and reconnect his service wire to the mains. “Hey you come back here. It is your job to take it up. Come and take it up. Am begging you, you are telling me. Are you not a federal government worker?”

Apparently afraid for their lives, the AEDC staff restored the supply of Mr. Iliyasu Ayuba after which he could be seen clearing his pistol of the bullets, which had loaded into the chamber to be fired where the AEDC staff remain adamant.

According to the Management of Abuja Electricity Distribution Company, The Niger State Police Launch manhunt for Mr. Iliyasu Ayuba following his actions that was also captured on video as Management Condemns spate of attacks.

Mr Oyebode Fadipe, Generaal Manager Corporate Communications for AEDC disclosed that the Customs boss fled to Port Harcourt where he serves. The Niger State Police told him to come back to Minna and failure to do so will escalate his case and the Police will be forced to write his employer and he has agreed to come back today Wednesday, 29, January.

The Company was reacting to the series of attacks on some of its staff in Ado, Jikwoyi and Bosso in Niger State last week. While Jikwoyi is in the Federal Capital Territory, Ado is a border town between Nasarawa State and the Federal Capital Territory. In two of the instances, which included two female staff, the victims were taken to the hospital but have since been discharged after they were treated for the injuries inflicted on them by their assailants. All the affected staff – Ebologlumen Harrison (Ado Area office), Mrs. Bose Lawal (Jikwoyi Area Office), Zaret Yusuf Alameen and Liman Adamu (Bosso Area Office) while they were all on routine revenue drive when they were attached.

Also in Bosso, another AEDC official, Mrs. Bose Lawal of Jikwoyi office was attacked by Aisha Usman (46) and her daughter Zainab Hassan Usman (21) after they were disconnected for an outstanding debt of N157,000. In Ado, Mr. Harrison Ebologlumen was attacked by Pastor Kenneth Adabe with a deep cut inflicted on his face. Pastor Adabe’s son with whom he attached the AEDC staff, is currently at large.

Pastor Kenneth Adabe is currently remanded in the Masaka Correctional Centre until February 10, 2020 when the matter will come up for trial on the orders of the Masaka Chief Magistrate Court. He is facing a five count charge of criminal conspiracy, mischief, obstruction of public servant from discharging his function, causing grievous injury and criminal force contrary to Sections 97, 148, 149 and 243 of the Penal Code.

AEDC said while it will continue to hold its staff accountable for good customer service, it will not hesitate to work with relevant law enforcement agents within its franchise area to ensure that customers or other members of the public who resort to self help or choose to take the laws into their hands are made to face the full wrath of the law they have so brazenly violated. Attacking AEDC staff it says is not a trait of civil relationship and must be discouraged through every legal means available.