Popular LGBT activist, Bisi Alimi has taken to his social media page to accuse an art centre in Lagos for discriminating against him because of his sexuality. Bisi pointed out that the same centre did not mind CNN host, Richard Quest’s sexuality when he came to Nigeria.

Bisi said he was planning an event in Lagos and asked his PA to find a “theatre-like-venue on the island”. They settled for TerraKulture and his PA contacted them and got their price list indicating that they were willing to do business.

However, to avoid a situation whereby they will be turned back on the day of the event due to inadequate information, Bisi Alimi said he told his PA to inform them of the identity of the person booking the venue.

The outspoken gay rights activist said that when they were informed that it was Bisi Alimi who was organizing the event, they refused to rent out their venue to him.

Bisi pointed out the hypocrisy in this by bringing up the fact that Richard Quest was well-received when he visited TerraKulture while in Nigeria.

“Richard Quest was guest of TK when he was in Lagos, with everyone drooling over him; he is a well known gay man,” Bisi said.

Calling out the art centre, he wrote on Facebook:

Yesterday I had an experience with TerraKulture that I am not sure if I should be angry, laugh or just resign to fate.

So my team and I have been planning on taking the Angelic Troublemaker tour to Lagos. The reason being, this has done well everywhere it went and the feedback has been amazing and mostly it has changed people’s lives and the way they do things.

So, they thought, it will be great to have it in Lagos at least. So I told them to go look for a theatre-like-venue on the island.

Terrakulture was number one on the list. My PA went and they gave us the cost and all, and then I asked if he informed them that I am the one doing the event, he said no.

I was not comfortable with that. I know how Nigerians are and the last thing I want is to have all the publicity and then get turned away on the day.

Just as a reminder, TK is owned by Austen- Peters, I won’t say more. Richard Quest was guest of TK when he was in Lagos, with everyone drooling over him; he is a well known gay man. I am sure the apologist will say he is known for something, maybe it is time you educate yourself and read my cv.

Again, like I said, I am not sure if I am upset, or should laugh or just say, this is Nigeria; the home of hypocrisy.

The reality is, I have the same show billed for four different venues in UK in February and the lowest amount I am collecting is £500. 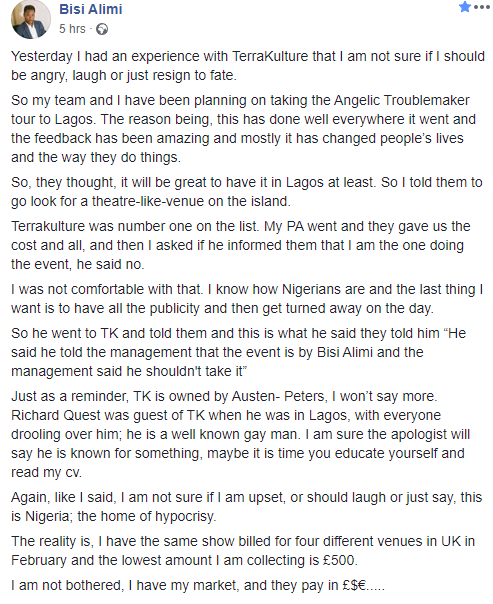 #ENDSARS: Buhari breaks silence on heavy protests, tells IGP what to do