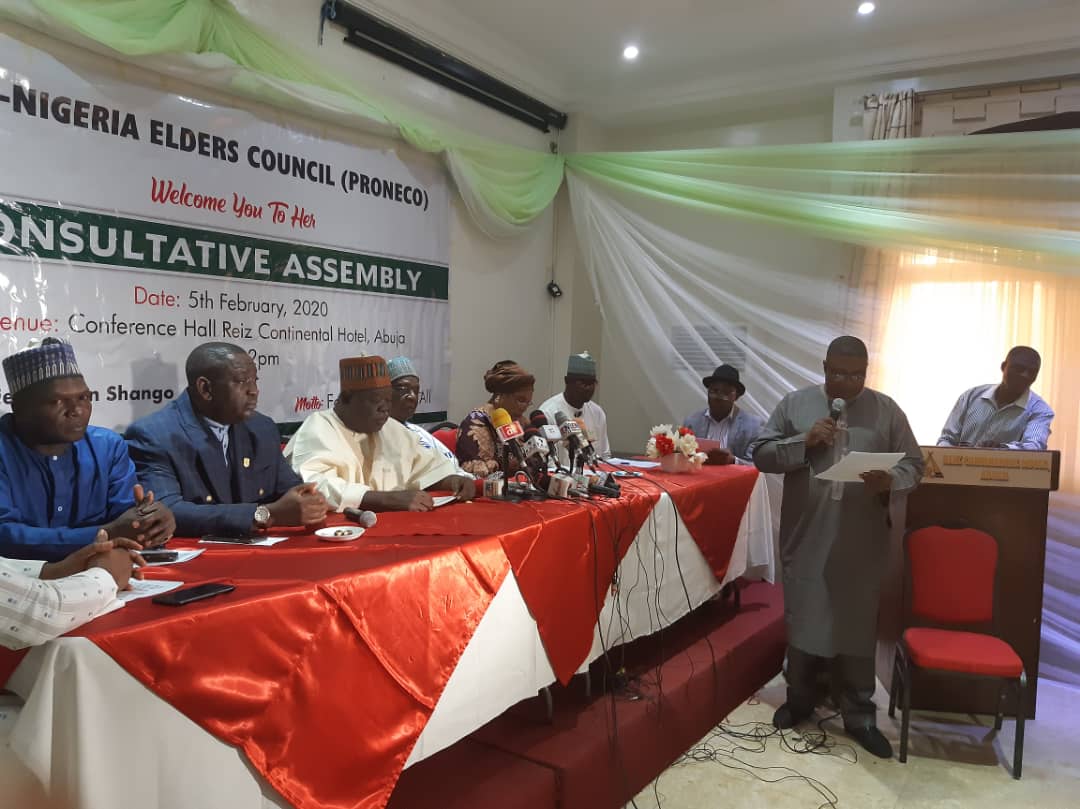 ....calls for support for IGP, Security Chiefs in tackling insurrection

Some respected Nigerian elders, under the auspices of Pro-Nigeria Elders Council (PRONECO) have passed a vote of confidence on President Muhammadu Buhari, urging the nation to support the Inspector General of Police and Service Chiefs to abate insurrection.

The council of elders made this known in a communique issued at the end of a one-day consultative meeting in Abuja on Thursday on the state of security in the country.

Having reviewed the resurgence of Boko Haram/ ISWAP terrorists, banditry and other security threats confronting the nation, the group resolved that President Buhari has soared higher above the evil forces amassed on the peace and stability of the nation.

It reckoned that the president has taken the country forward in all ramifications despite artificial incitements of public resentments.

PRONECO is particularly pleased with the president’s insistence on the Service Chiefs, holding firm and refusing to succumb to pressure.

The council of elders, however, called on Nigerians to show solidity with the nation’s security heads, as only with this can the recent security challenges be subdued. 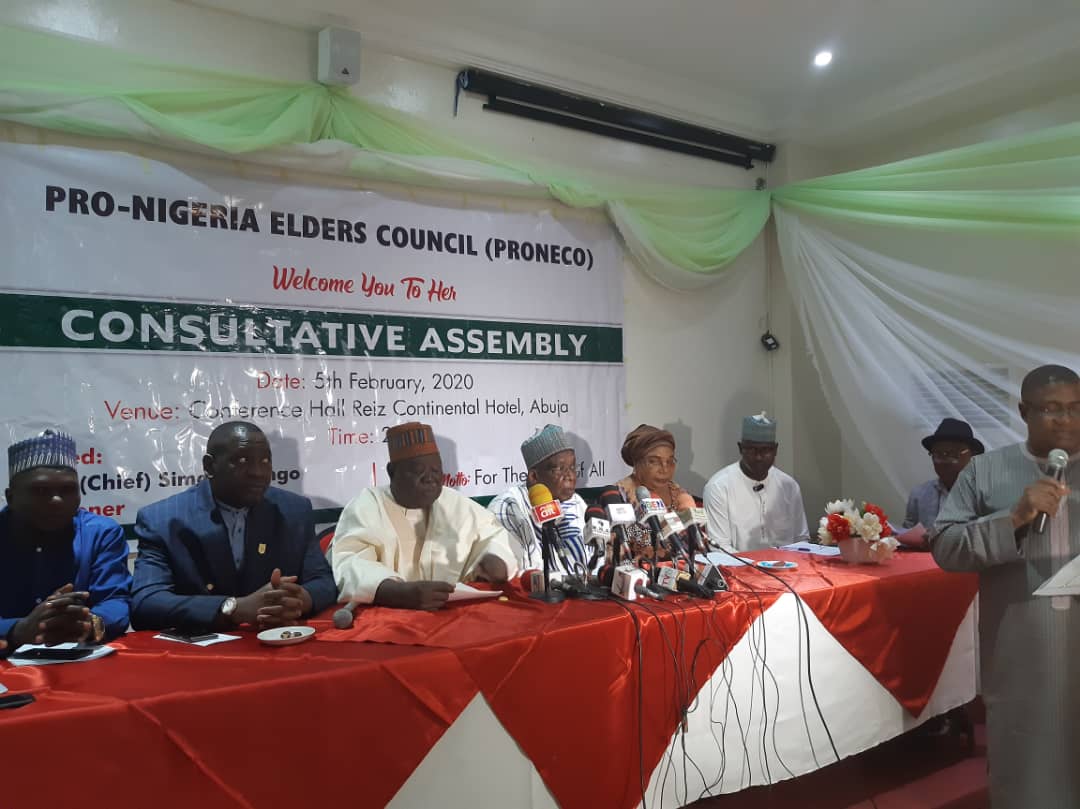 The Pro-Nigeria Elders Council) with members drawn from the 36 states of the federation, converged in Abuja today for an all-inclusive stakeholders meeting to brainstorm. We engaged in intensive deliberations as compelled by the prevailing resurgence of politically-induced insecurities in parts of Nigeria and heat in the polity intent on destabilizing the country.

Members endorsed a number of resolutions’ pursuant to matters of national security concerns and the efforts of President Muhammadu in curbing these nascent trends in Boko Haram and Islamic State West African Province (ISWAP) terrorists and armed bandits renewed carnages on Nigeria: PRONECO resolved as follows:

Firstly, the Pro-Nigeria Elders Council (PRONECO) salutes the patience, understanding and courage of every Nigerian despite the deliberate and barefaced politically-instigated resurgence of insecurities in some areas in the country.

We have perceived it as an agenda hatched, crafted, manipulated and mindlessly executed by disgruntled elements in the system or anti-state actors to provoke Nigerians, engender unfounded lack of public confidence in the Nigerian military and spark distrust in the political leadership of President Muhammadu Buhari and the proven hard working Service and Security Chiefs.

PRONECO reviewed the resurgence of Boko Haram/ ISWAP terrorists and their internal collaborators’. But we came to the inevitable conclusion that despite the orchestrated actions and its seeming effects on the general security situation in the country, President Buhari has still soared higher and still triumphing against the evil forces amassed on the peace and stability of Nigeria by these evil internal and foreign forces. The artificial restlessness induced by actions of armed mercenaries would soon be tamed maximally based on Mr. President’s revaluation of the problem and actions being taken to massively arrest perpetrators and their agents to face the wrath of the law.

By whatever yardstick of assessment, we have no modicum of doubt that Mr. President has defiantly taken the country forward in all ramifications. The artificial incitements of public resentments against this progressive administration should never constitute a distraction in achieving set targets.

We also salute d the resilient leadership of President Buhari which has earned him an unbreakable trust from Nigerians and the globe. This is attested by viral international and local news reports. The meeting wholeheartedly and passionately lends its full support to the various authorities which have acknowledged Mr. President’s relentless efforts and the dogged stand of his administration against plots to return the country to the dark days of unmitigated bloodbath.

The meeting also salutes the choice of Mr. President’s appointees manning the security architecture of the country. We resolved that the Security Chiefs have not only refused to shirk in the face of all difficulties, sabotage of their gallant efforts, but have continued to determinedly tackle even renewed atrocities of insurgencies and insurrections with renewed zeal and vigor.

Therefore, we resolved that all our serving security chiefs have performed exceeding marvelous individually and collectively in the light of subsisting encumbrances’ and deserves not only to be encouraged, but maintained on their positions to sustain the winning streaks against Boko Haram/ISWAP terrorist and armed bandits up again to torment the country.

We perceive the calls by the National Assembly (NASS) and some other questionable characters for the sack of the Service and Security Chiefs as exposure of their veiled conspiracy or manifestation of their insidious plans to finally sink Nigeria in internecine clashes of bloodletting. The meeting therefore resolved that Nigerians owe themselves the moral obligation to discountenanced such campaigns as cajoling Mr. President to sack Security Chiefs smacks of mischief and greasing the evil nest of these unpatriotic elements.

It is condemnable and unacceptable because the efforts of current Security Chiefs are worthy of commendation anywhere in the world. Consequently, the meeting wholeheartedly commends their efforts, as we urge Mr. President never to harken to such satanic calls for their sack, as it will create a lacuna and embolden armed enemies to freely feast on Nigeria.

The meeting noted that what Nigeria is currently experiencing is not the normal Boko Haram or farmers/herder’s crisis, but a politically -instigated crises across the country with foreign backed conspirators to make the country fail and discolour the famed integrity and strong leadership character of President Buhari.

It is no longer news that hired agents of destabilization are hovering all over Nigeria to cause possible unabated violence, nourish the break-up agenda of Nigeria masked under various opposition platforms have been on the prowl. They are working day and night to see that the change agenda of Mr. President does see the light of day or this democratic Government crumbles like previous administrations’ in the country merely to puncture President Buhari’s acclaimed sanctity to leadership excellence.

The meeting observed and unequivocally affirms that it has also come to the knowledge of this gathering of these wisemen that there are multi-layered deliberate campaigns of calumny are being sponsored by some highly placed individuals in the country. Such are backed by some renegade members of the ruling APC in order to destabilize the nation because they are personally aggrieved for falling out of favour/patronage with the present government.

The meeting called on the politicians and other disgruntled elements who are still nursing the wounds of defeat and rejection by the Nigerian masses, in the 2019 general elections; and have resorted to kick-start very early political activities ahead of 2023 should be mindful of the distractions it has implanted in the polity by the method they have employed. We see it as part of ploys, exacerbating insecurities in parts of the country backed by foreign interference and the glaring agenda to destroy Nigeria.

The PRONECO strongly frowns at the partisan attempts to demean and rubbish the campaigns’ against corruption in Nigeria by the opposition in Nigeria, who have contracted internal and foreign organizations to discredit the anti-corruption campaigns’ by all means, as reflected in the fake and dishonest recent Transparency International’s (TI) on rating and ranking of Nigeria, which untruthfully proclaimed an imagined Nigeria’s slide backwards on corruption index.

It is evident everywhere that Mr. President’s anti-corruption campaigns have drastically reduced acts of sleaze, embezzlements and mindless looting of public resources throughout the country, especially in Ministries’, Departments Agencies (MDAs). And the stiff resistance to the anti-corruption wars by the same retrogressive elements or proxies who benefits from such corrupt acts to frustrate public transparency and accountability is noted. 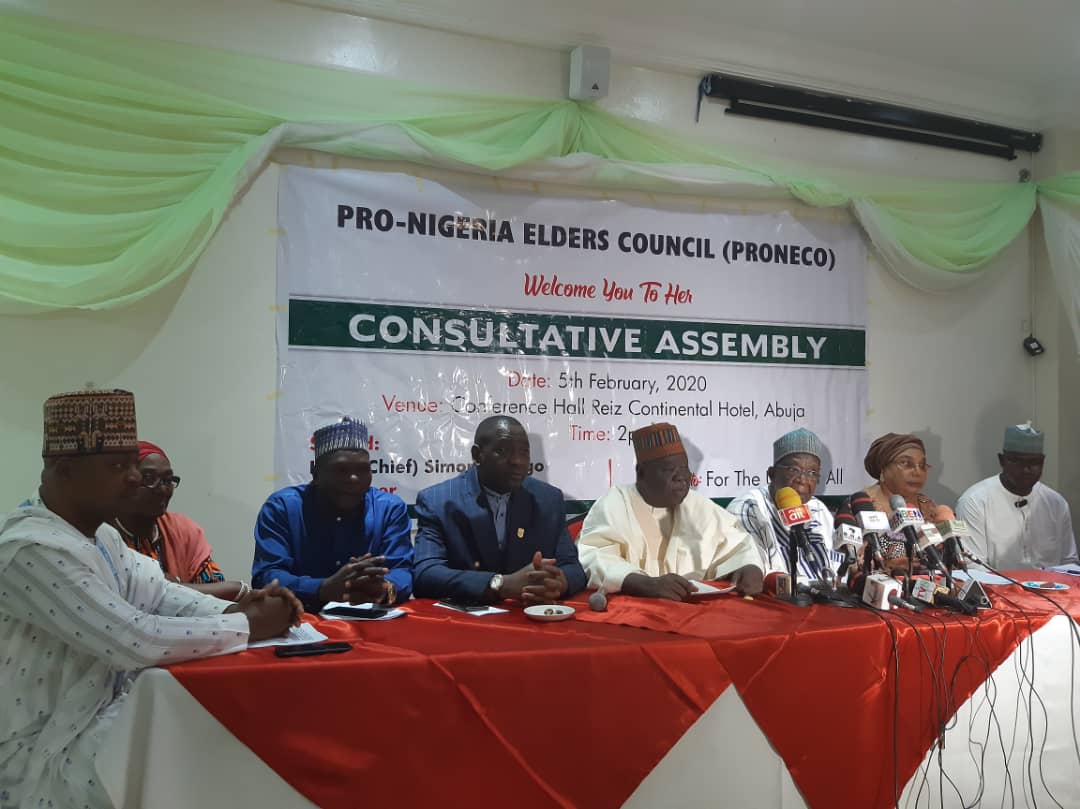 However, there is incontestable and empirical evidence that the Presidency is resolute and determined to outsmart the sabs constituting the cogs in the wheel of progress. And so, we rejected the recent report by TI; declared it condemnable and hollow in its totality as it bears no semblance of truth with the realities on the ground.

The meeting immensely appreciated Mr. President for standing by Nigerians since the year 2015 to get the country rid of both corruption and terrorism. These are the twine most destructive, endemic and pervasive national malaises that have tethered the progress of the country to retrogressive pillars.

The meetings therefore vehemently warned those behind the new plots of destabilizing the country using religious, political or ethnic killings as a bait to put a halt to it. Their failure to desist from such unpatriotic and evil acts against the country will incur the wrath of Nigerians generally against them.

PRONECO was extremely shocked at the disclosures from credible information on the frightening volume of amassed arms and doling out of monies acquired through illicit means to fund violence, by engaging vulnerable youths to indulge in objectionable acts of attacks, killings and arson in different parts of the country.

Nigerians must know that it is our responsibility individually and collectively to team up with security agents in our respective domains to frustrate and put a halt to these acts of evil men determined to blight their future. Like Peter McWilliams once said, Nigerian youths must; “Be willing to be uncomfortable. Be comfortable being uncomfortable. It may get tough, but it’s a small price to pay for living a dream.”

May the Almighty God continue to bless Federal Republic of Nigeria, the President, members of the Armed Forces of Nigeria; Service and Security Chiefs and Nigerian troops.