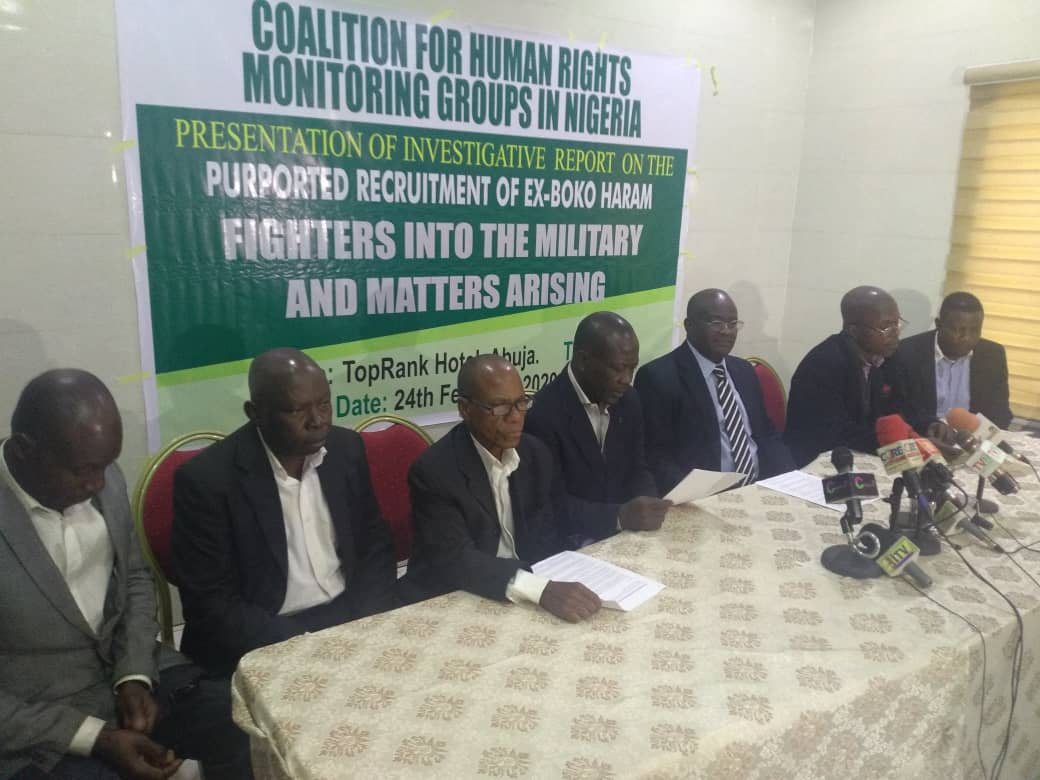 The Coalition for Human Rights Monitoring Groups in Nigeria (CHRMGN) has rubbished speculation that the Nigerian military recruited repentant Boko Haram terrorists into its fold.

The human rights group made the disclosure in a special report after embarking on a thorough investigation of the military’s recruitment process since 2015.

In the report signed by Helen Adeshina and Bitrus Hosea Damut, CHRMGN said 250 repentant Boko Haram fighters enrolled for the de-radicalization programme and were reabsorbed into their communities and not the military.

It further disclosed that 30 of the repentant Boko Haram fighters are fully engaged in religious activities aimed at discouraging the youths from going into crime and terrorist activities.

According to the group, the military’s recruitment process is transparent and devoid of interference from any quarters and as such there isn’t any room for ex-Boko Haram members.

The Coalition of Human Rights Monitoring Groups, however, urged the military to begin the process of informing the general public of its recruitment process.

There have been concerns that Boko Haram terrorists, who surrendered to troops and undergone de-radicalization programmes organized by the Nigerian Military, were allegedly being absorbed into the Military. Some media reports have also alleged that the Military was recycling insurgency by the alleged recruitment.

The Nigerian Military had stated that the de-radicalization, rehabilitation, and reintegration programme is a federal government programme conducted under the auspices of Operation Safe Corridor as a non- kinetic operation.

It further stated that the de-radicalization model is therefore not new in the global community, as such a model exists in Algeria, Colombia, Pakistan, and Saudi Arabia, where persons involved in violent extremism have been de-radicalized and rehabilitated and that the process is, therefore, an internationally accepted practice.

These allegations were indeed weighty and it necessitated a comprehensive scrutiny in the light of the prevailing circumstances.

The Coalition of Human Rights Monitoring Groups consequently commissioned an investigative report to look into the allegations to put issues in proper perspective for the members of the unsuspecting general public in light of national interest.

This research work relied on primary and secondary sources of data collection that involves oral interviews, distribution of structured and unstructured interviews, review of operational manuals and records, and the scrutiny of military records.

The Nigerian Military have debunked such allegations stating that its recruitment process is devoid of emphasis on ethnic or religious affiliations and that there has never been a time where ex-Boko Haram militants were given the opportunity of becoming soldiers into the Nigerian Military.

The Coalition for Human Rights Monitoring Groups in Nigeria undertook research that involved the scrutiny of the recruitments into the Nigerian Military from 2015 to date and came up with the following findings:

In the course of the investigative reports, the commissioned team took an inventory of the number of ex-Boko Haram members that submitted to the de-radicalization programme and realized that about 250 repentant Boko Haram fighters that enrolled for the de-radicalization programme have been reabsorbed into their communities and not the Nigerian Military as been speculated in certain quarters.

A total number of 220 repentant Boko Haram members were identified in the various communities that span through North-East Nigeria, and it can be stated that they are indeed engaged in productive ventures such as farming, fishing, tailoring, shoemaking, and vigilante services in their various communities.

The team of researchers identified that about 30 of the repentant Boko Haram fighters are fully engaged in religious activities aimed at discouraging the youths from going into crime and terrorist activities.

The team of researchers also scrutinized the various recruitments that have been carried out by the Nigerian Military and found out that from available records, there has been an emphasis on Federal Character system that entails the even spread of recruits into the Nigerian Military from 2015 to date.

This fact was buttressed by the fact that some of the requirements for enlistment into the Nigerian are that such candidate must not be an ex-convict, must be of sound mind, and must not have been engaged in acts the undermines National Security in Nigeria, in addition, to have attained some level of educational qualification.

It was also discovered that the enlistment process into the Nigerian Military is subject to several layers of security screenings by security agencies, including the profiling of nuclear and extended family members of the applicants by different independent committees as a way of ensuring that people with questionable characters and history are screened out.

The recruitment into the Nigerian Military is based on merit, and certificates tendered are subjected to verification by the West African Examinations Council and other certificate awarding institutions.

The Coalition of Human Rights Monitoring Groups, having extensively scrutinized the recruitments into the Nigerian Military from 2015 to date, concludes that the process has been transparent and devoid of interference from any quarters.

It was also realized the no ex-Boko Haram members had been recruited into the Nigerian Military as no records are backing the allegations.

The Nigerian Army and other arms of the armed forces have carried out its recruitment in the most transparent manner in line with both Federal Character Principles and due diligence to meet with the best international standard.

The Coalition for Human Rights Monitoring Groups in Nigeria as a result of the investigative research work makes the following recommendations:

That the leadership of the Nigerian Military must begin the process of informing the general public of its recruitment process.

That the leadership of the Nigerian Military should begin a sensitization programme in the media to educate members of the general public of its recruitment process in a bid to discourage rumors peddling by mischievous individuals and organizations.