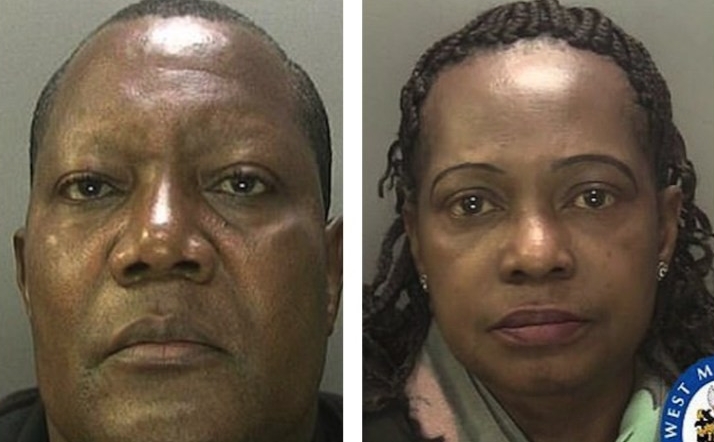 A 60-year-old Nigeria pastor of the Cherubim and Seraphim identified as Michael Oluronbi has been sentenced to 34 years imprisonment for raping male and female members of his church for over 20 years.

WITHIN NIGERIA learnt that wife of the Nigerian pastor identified as Juliana Oluronbi who is 58-year-old was also jailed for 11 years after being found guilty of three counts of aiding and abetting rape after helping arrange some of the terminations.

Recall that the self-styled prophet was convicted by a UK court for 24 counts of child sexual abuse and rape of his congregation while his wife was also convicted of three counts of aiding and abetting rape.

It was revealed that he carried out some of his offenses by convincing five of his victims who attended his church, to take part in ‘spiritual bathing’, which he claimed would ‘cleanse’ them of evil spirits.

The offences happened over a period of 20 years at various locations in Birmingham and London.

During the trial, jurors heard Oluronbi was linked to a Christian church in Edgbaston, Birmingham, the Cherubim and Seraphim Church.

In a confession videoed last year by a victim’s family member who had confronted him, the ‘feared’ pastor is heard saying: ‘Everything was just my fault, and as I said before, I wasn’t meant to be human.

‘I wasn’t meant to live under the roof of any human being and I said that I was an animal.’

At his sentencing hearing, it was heard there were at least 88 separate occasions on which he raped his victims.

Judge Sarah Buckingham said the real purpose of the ‘spiritual baths’ was to ‘fulfil your insatiable sexual appetite’.

Sentencing ‘arrogant’ Oluronbi on Friday, Judge Buckingham said: ‘You claimed that God was instructing you to conduct holy baths.

‘Its real purpose was to fulfil your insatiable sexual appetite. The children feared you and this enable you to continue your grip.’

‘Your offending has had an extreme and severe impact on all of your complainants. Any attempt to suggest otherwise would be without foundation.

‘You abused your position of trust – they trusted you like God.’

The judge continued: ‘You did this because you are an arrogant, selfish and vain man. In my judgment, your offending must be one of the worst cases of sexual abuse of multiple children to come before the courts.’

The disgraced pastor and his wife will be required to sign the sex offenders’ register for life.