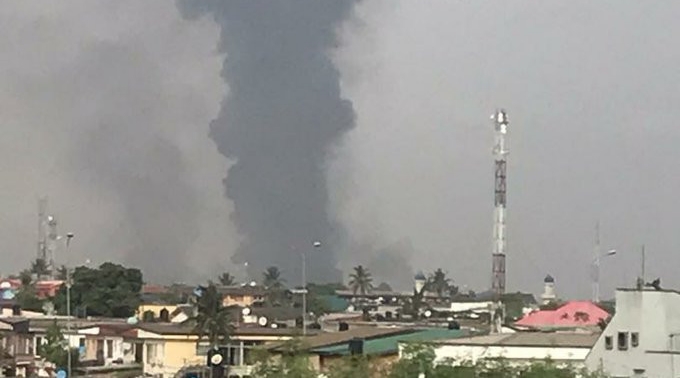 Panic as pipeline explodes at Abule Ado in Lagos

Panic in Lagos community as a pipeline reportedly owned by the Nigeria National Petroleum Corporation (NNPC) reportedly exploded in the early hours of today in Abule-Ado community in Lagos State.

WITHIN NIGERIA gathered that the massive explosion which rocked Lagos on Sunday morning has led to the destruction of houses in different parts of the state.

According to report, residents of Ijegun, Ikotun, Egbeda, Abule Ado, Okotoa, Isheri Olofin, FESTAC, Satellite Town said they were affected by the explosion.

A resident of FESTAC told newsmen that “the roof of our building is off and a nearby school is on fire,”.

As at the time of filing the report, the cause is yet to be known but an official of the Lagos State Emergency Management Authority (LASEMA) told newsmen that a pipeline exploded around Abule Ado in Amuwo Odofin local government area of the state.

Reacting on the tragic incident, the Federal Fire Service via his Twitter page disclosed that its men are making efforts to get information on the incident.

“We are in touch with our men in Fire Stations around Badagry and Festac, we are trying to gather more information as regards the reported explosion in Lagos State, Nigeria. We are on it,” the service tweeted.

WATCH THE VIDEOS BELOW: