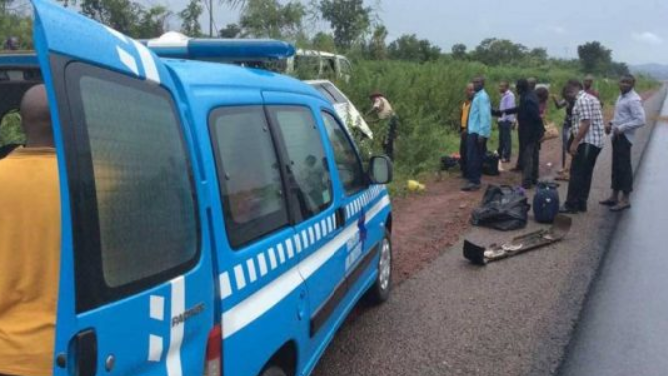 Tragedy as two people reportedly lost their lives after a truck knocked down the motorcycle they were riding in Anambra state.

WITHIN NIGERIA learnt that the deceased ones identified as 71-year-old Cyprian Nwaigwe and 65-year-old Ikechukwu Nwabia were killed when a Mercedes Benz truck with registration number XE 254 AWK knocked down the motorcycle they were on along Orlu-Ihiala road, Anambra state.

It was also learnt that they were rushed to a hospital in Ihiala where they were confirmed dead.

Reacting to the sad loss, the Police Public Relations in the state, SP Haruna Mohammed confirmed the tragic incident.

SP Haruna Mohammed said that on Friday, March 14, 2020, at about 3:30 pm, one Ekene Agusi of Amafor Oru West LGA of Imo State, the driver of a Mercedes Benz truck with registration number XE 254 AWK, knocked down a Mate CY80 Motorcycle with Registration number KPP 192 QA.

He said the motorcycle rider and one other person at the back seat of the motorcycle sustained varying degrees of injuries and were confirmed dead in the hospital.

He said: “Police operatives attached to the Motor Traffic Department in Ihiala Division immediately visited the scene and rushed the victims namely Cyprian Nwaigwe ‘m’ aged 71years and Ikechukwu Nwabia ‘m’ aged 65years  to Our Lady of Lourdes Hospital for medical attention but were certified dead by a medical doctor while receiving treatment.”

He added that the driver of the vehicle has been arrested and the victims’ corpses have been deposited in the hospital mortuary for postmortem examination.

The case is being investigated.