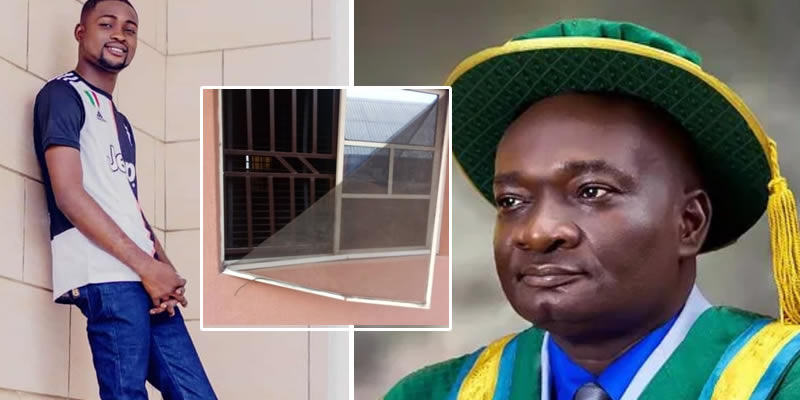 A former student of Federal University of Agriculture (FUNAAB) Abeokuta identified as Ifemosu Micheal Adewale has accused the vice chancellor of the institution, Prof. Felix Kolawole Salako of attempted murder.

Recall that Ifemosu was allegedly expelled unlawfully by the management of Federal University of Agriculture (FUNAAB) Abeokuta for writing an open letter over lingering transportation and insecurity issue.

The alleged threats to his life was detailed in an article posted on his instagram handle @ifemosumichael where narrated how unknown armed men stormed his apartment with cutlasses and guns.

Narrating how some assailants stormed his apartment in an attempt to kill him, Micheal Adewale disclosed that they arrived at exactly 1:00 am, tore the net of his room and afterwards moved to the last room in his compound and started shouting “Where is Adewale?”.

My name is Ifemosu Michael Adewale. I am a Nigerian citizen and the recent student who was unlawfully expelled from the Federal University of Agriculture, FUNAAB, Abeokuta for writing an open letter to Funaab management over the Lingering Transportation issue and Insecurity.

At exactly 1:am on Tuesday ,
March 17, 2020, some set of hired assasins came to my apartment around Apakila camp with Sharp Cutlassses and Guns, they Tore the Net of my Room and afterwards moved to the last room in my compound, tore the Net and started shouting ‘Where is Adewale’ It was a Lady’s Room and after she screamed that I was not around, they peeped through the windows with their torch lights to affirm my presence, when they could not find me, they left with words ‘He is Fighting the VC’. Earlier before this Incidence, I have received a lot of threatening calls through private numbers telling me they will kill me for challenging my unlawful and illegal expulsion from the university and thereby ridiculing the Vice-Chancellor.

In the circumstance, I am making this petition public so that when you refuse to attend to my complaint and outcry, the ordinary people of this country will, at least, know from where my death came and I will not join the long list of unresolved murders.

My killer, should, at least be known.
Thank you for, at least, reading my petition.