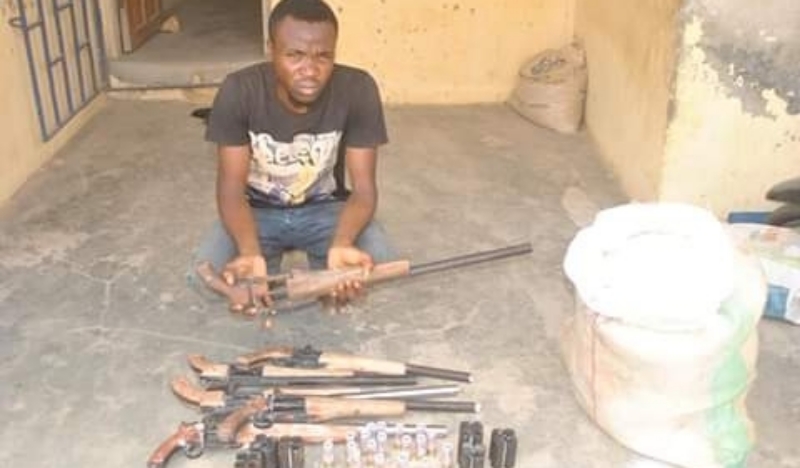 A 25-year-old suspect identified as Danjuma Toko has been arrested by the Niger State Police Command for unlawful possession of firearms in Minna.

This was disclosed by the Commissioner of Police in the state, Usman Adamu in Minna, the capital of Niger on Tuesday.

Adamu disclosed that following a tip off, a team of the SARS operatives attached to the command arrested one Danjuma Toko, 25, of Zuru town in Kebbi.

“On 22nd March, 2020 at about 0800hrs, acting on a tip-off, a team of SARS operatives attached to the Command intercepted and arrested one Danjuma Toko ‘m’ 25yrs of Zuru Kebbi State, at Kontagora park by Mobil Roundabout Minna, in the process of searching his luggage, six locally made revolver short gun with eighteen cartridges concealed in a bag of Garri were recovered.” said the commissioner said.

Adamu said that the suspect confessed that it was given to him by one Paul at Ogoja in Cross River to deliver same to his cousins, Kabiru Kanda and Dauda Kanda of Zuru town in Kebbi.

“During interrogation, he confessed that it was given to him by one Paul at Ogoja Cross River State to deliver same to his cousin brothers one Kabiru Kanda and Daudu Kanda both ‘m’ of Zuru town, Kebbi State. Case will soon be charged to court.” hr added.

The commissioner appealed to residents to volunteer information about suspected criminal elements in their midst.