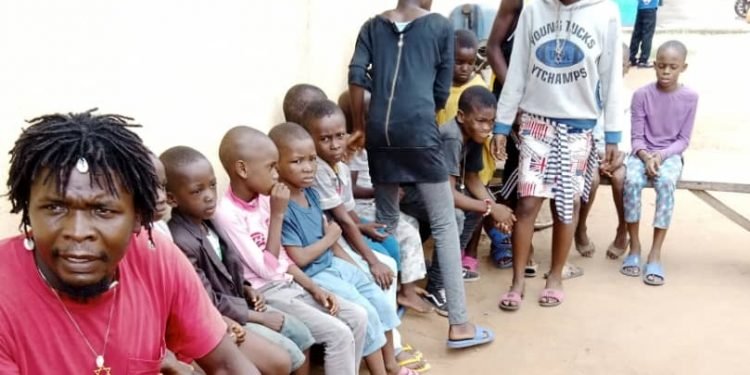 The rescue of 19 children by the operatives of the State Anti-Robbery Squad (SARS) along Umuiika axis of Enugu-Port Harcourt Expressway has been confirmed by the Abia State Commissioner of Police, Ene Okon.

This was disclosed by the police commissioner while speaking with newsmen via telephone chat.

Oko disclosed that the SARS operatives rescued the children being conveyed in a Toyota Sienna while conducting a stop and search operation at the Isiala Ngwa South LGA axis of the busy Expressway.

He said that he directed the SARS personnel to hand over the four suspected traffickers nabbed by his men to the State Criminal Investigation Department (SCID) for continued investigation.

While warning people who indulge in child trafficking and those contemplating joining the business to desist from such, the state police boss stated that police and other security agencies would make sure that Abia isn’t a safe haven for their illicit businesses to thrive.

A source with the Abia State Police Command who prefers anonymity said “The suspects said that they have a school where they teach those children, Judaism in Asa area of the state. They were not specific about the school or the place where the school is located.

“It is not that clear, but I think that they were kept with the human trafficking section at the State Criminal Investigation Department (SCID). The suspects said that they were taking the children at a place in Omoba in Isiala Ngwa South where they will quarantine them.

“Are they officials of NCDC (National Center for Disease Control) to quarantine the children? Why didn’t they invite the parents of the children to come and pick them since last week that the state government announced the closure of schools in the state?

“It is for the State CID to unravel where the suspects brought the children. Where they are going with the children and why they didn’t invite their parents to come and pick them up from their school in the face of this coronavirus pandemic?

“There is no reason why they should be they should be keeping such number of children with them when the state Governor has issued a stay-at-home directive?

“Why should they (suspects) be taking the children to a special place outside their home and out of the reach of their parents?

“I am sure that officers at the specialized section of the SCID will still talk to them individually in order to ascertain the claims of the suspects,” a source in Abia Police Command stated.