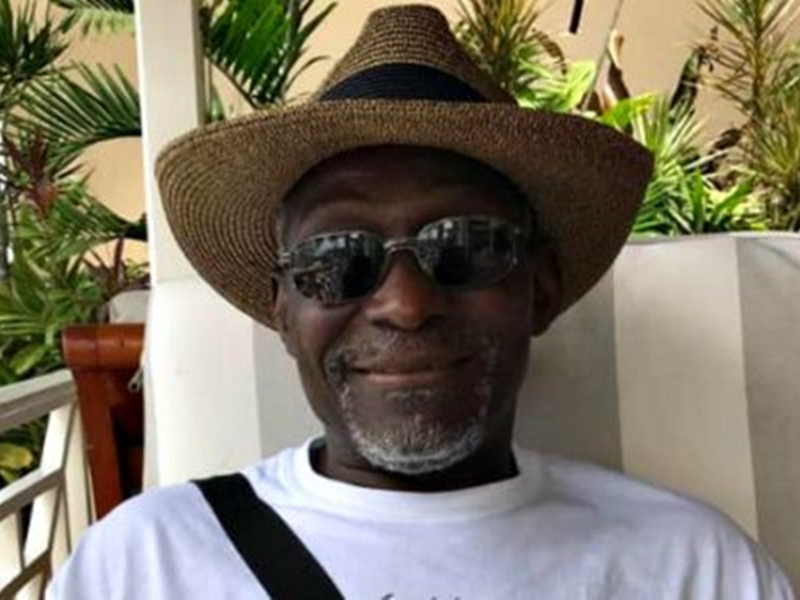 His son, Dani Sa’adu, announced the demise of his father who died in London on Tuesday and was until his death a physician at the Princess Alexandra Hospital NHS Trust.

“Today at approx.. 7.30am, Dr. Alfa Saadu (my dad) died of the Coronavirus. He had been fighting the virus for 2 weeks but could not fight anymore,” . He said.

Describing his dad as a living legend who worked for the NHS for nearly 40 years saving people’s lives in the UK and in Africa, he said up until he got sick, he was still working part time saving people.

He said the “NHS were amazing and did everything they could.”

“The Coronavirus is not a joke, please take it seriously and listen to the government,” he urged people.

Reacting to the death of Sa’adu (who was the Galadiman Patigi), the Emir of Ilorin and Chairman Kwara State Traditional Council, Alhaji Ibrahim Sulu-Gambari, described his death as a great loss to humanity.

The monarch in his condolence message issued on Tuesday by his spokesman, Mallam Abdulazeez Arowona, expressed sadness over his unfortunate demise saying, “We have lost an irreplaceable asset in the nation.”

Sulu-Gambari said, “the late Galadiman Patigi was one of the finest medical practitioners whose penchant for professionalism, humanity and traditional institutions knows-no-bound as a foremost product of the emirate.

“He was the son of the late Alhaji Ahman Pategi, one of the highly respected Ministers who served in the Northern Nigeria under the late Premier, Sir Ahmadu Bello, Sardauna of Sokoto in the first republic. During my stay in England, I was his guardian, he lived with me and enjoyed his loyalty, steadfastness and humility.

“I received the news of his death with crude shock and depression because he was indeed a great asset for us in Kwara and Nigeria in general. He contributed his quotas to national development as foremost medical practitioner and community leader. ”

The emir commiserated with the Kwara State Governor, Mallam Abdulrahman Abdulrazaq; Etsu Patigi, Alhaji Umar Bologi II, and the entire people of Patigi emirate council over what he described as ‘the colossal loss.’

He prayed Allah to forgive the late Galadiman Patigi his shortcomings and give his immediate and extended families the fortitude to bear the irreparable loss.

The Facebook post shared by Saraki to mourn Dr Saadu reads: “Inalilahi Wa Ina Ilaehi Rajiun. My condolences go to the family of late Dr Alfa Sa’adu, the people of Pategi and Kwara State on the death of the foremost medical practitioner who passed away in London this morning (March 31).

“Late Dr Sa’adu provided leadership for our people in the diaspora as he served for many years as chairman, Kwara State Association of Nigeria (Kwasang UK). Back at home, he was a community leader and traditional office holder as Galadima of Pategi. He will be sorely missed.

“We pray that Allah forgive his sins and grant him a place in Aljannah Firdaus. May Allah also grant his family, the people of Pategi and Kwara State the fortitude to bear the loss.” 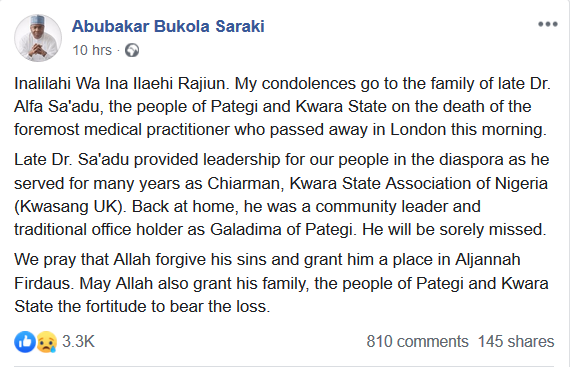 Another Facebook post mourning the doctor reads: “A very sad day for UK doctors as one of the brightest, kindest and most respected stalwarts of Nigerian doctors in the UK, Dr Alfa Saadu has just died after volunteering to help in the wards and caught the bug. He came off the ventilator this morning.

“It is indeed a sad day for Nigerian doctors in UK. But also for doctors worldwide who sometimes are thrown into the deep end without adequate resources. May his soul RIP.

“We just lost a gem in the Nigerian medical community in the UK to COVID-19.”

His son, Dani Saadu also wrote a tribute to his father. Dani added that Dr Saadu “had been fighting the virus for 2 weeks but he could not fight anymore. 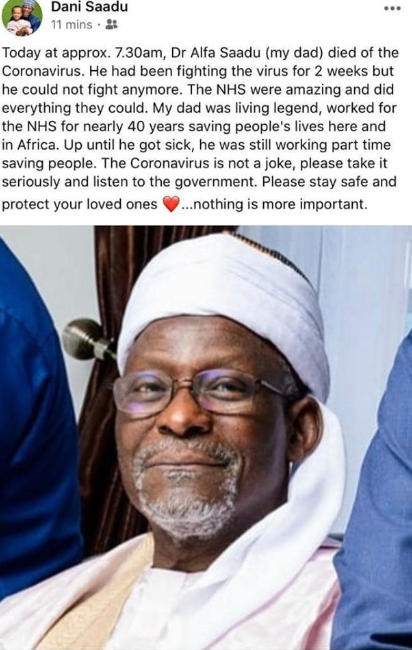