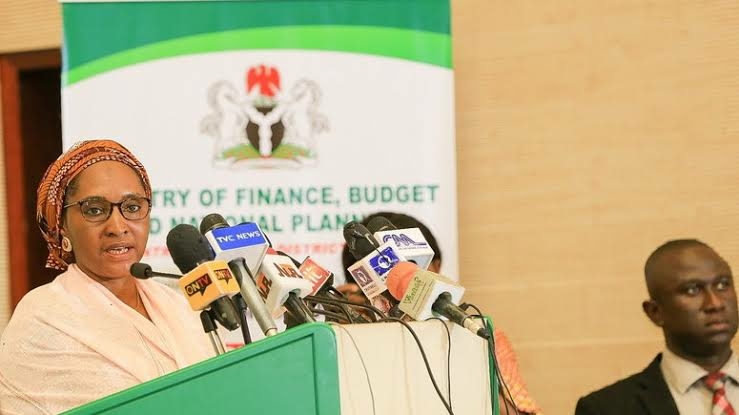 This is because as we cut down the size of the budget, we also have to bring in new expenditures previously not budgeted to enable us respond adequately to the COVID-19 pandemic”.

The minister further explained that the federal government will have direct revenue of funding the budget to the tune of N5.158 billion. Ahmed added that the deficit to the budget is N5.365 trillion, saying this would be financed by both domestic as well as foreign borrowing. She stated:

“The foreign borrowing we are doing for 2020 are all concessionary loans from the IMF which has already been approved and has crystallised from the World Bank, Islamic Development Bank as well as Afro EXZIM Bank. “There will also be some drawdown of previously committed loans for major ongoing projects that we will be drawing from both exiting facilities as well as some special accounts with the approval of Mr President and the National Assembly, as well as revenue that we are expecting to realize from privatisation.

“So the borrowing, the multilateral loans draw down coming from special accounts and coming from the privatization will fund the fiscal deficit of N5.365 trillion that we have in the proposed amendment of the 2020 budget.” The minister also disclosed that the federal government requested on behalf of Ebonyi State government for a loan of $80 million from the Islamic Development Bank, for the construction of Abakilike ring road project.

According to her, while the federal government is the one borrowing from the bank, it will be on lending the loans to Ebonyi State government. She continued: “We have done our debts sustainability analysis that proves that Ebonyi State has the capacity to repay this loan which is provided on a basis of long tenure for repayment. “This Ebonyi ring road connects 13 local governments in the states as well as the neigbouring Cameroon. It is a major road that will provide access to the citizens in the state, to farmers, markets and will enhance economic activities in the state. And the neigbouring states will also benefit from this project.”

Ahmed also disclosed that council approved for the Nigeria Customs Service to purchase boats which are manufactured in Nigeria for its surveillance and anti-corruption activities on the maritime waters. Okays N47bn For Power Sector The federal government also approved N47 billion for the provision of additional 40 megawatts of electricity to the national grid. Minister of Power, Sale Mamman, who disclosed after the virtual FEC meeting, said the 40 megawatts would be evacuated from Kashimbilla Dam in Taraba State where it ii currently being generated.

He said, “The Council approved the ministry’s memo for the revised estimated total cost for the augmentation of the subsisting contract in the sum of N47, 235, 303, 821.90 to provide additional critical power grid infrastructure for the full evacuation delivery and utilization of 40 megawatt currently being generated from Kashimbilla, via Takum, Wukari and Yandev to the national grid.” The Power minister noted that the additional 40 megawatts will boost power supply in Taraba and Benue States as well as the entire North-East region of the country. He noted that if the generated power was not evacuated from its source, Nigeria will lose about 120 gigawatts of power, equivalent to $9million dollars in a year.

In his briefing, minister of Information and Culture, Lai Mohammed, said activities and programmes of government will continue to run despite the challenges posed by the dreaded COVID-19. He said, “It’s been quite a while and I am sure you all know why. It is COVID-19 but we must not allow COVID-19 to completely stop us. It might have slowed us down but we must find ways of coping with COVID-19. “The task force and the various emergence response centres all over the country are doing their best to arrest and slow down the spread.

Government also thought it was important to at least find a way of running government. That is why we resorted to technology. “After a long time, for the first time in the history of this country if I can remember, a federal executive council was held via teleconferencing, where only ministers that had memoranda to present were physically present at the villa, while other ministers joined from their various offices via teleconferencing and if this is anything to go by, it has even proven to be very efficient way of running government.”

On his part, minister of Agriculture and Rural Development, Sabo Nanono said a loan facility of about €950,000 euros (about N1.2billion) was approved for the sector by the council. He said the loan is for agricultural mechanisation that will cover about 632 local government areas plus 140 processing plants. Nanono said, “This is going to be a major revolution in the agricultural sector like we have never seen before. I think the executive council has done the right thing and has approved this. “We anticipate direct jobs from this in the region of seven million, while indirect jobs will be in a region of 20 million or so. So, that is the essence of this. There will be 140 agro processing attached to these service centres

In a statement issued yesterday, the presidency noted that the power and road projects will not be among the five priority projects to benefit from the $311 million Abacha loot under the Presidential Infrastructure Development Fund (PIDF) managed by the Nigeria Sovereign Investment Authority (NSIA). The statement issued by presidential spokesman, Mallam Garba Shehu, noted: “Although the Mambilla and East-West expressway are regarded under the PIDF as priority projects, I have ascertained that they are exempt from the agreement signed between the Nigerian, United States and British territory of Jersey governments.

“According to the document, only the second Niger bridge, Abuja-Kaduna-Kano expressway, and Lagos-Ibadan expressway will benefit from the repatriated funds. The funds are domiciled in the NSIA. “All print and online media should please take note of this correction and make the necessary adjustments to their previous publications on the issue.”